On Thursday, the BJP delegation including senior leader Sukanta Majumdar visiting kin of victims of the horrendous attack in Rampurhat was allegedly stopped. 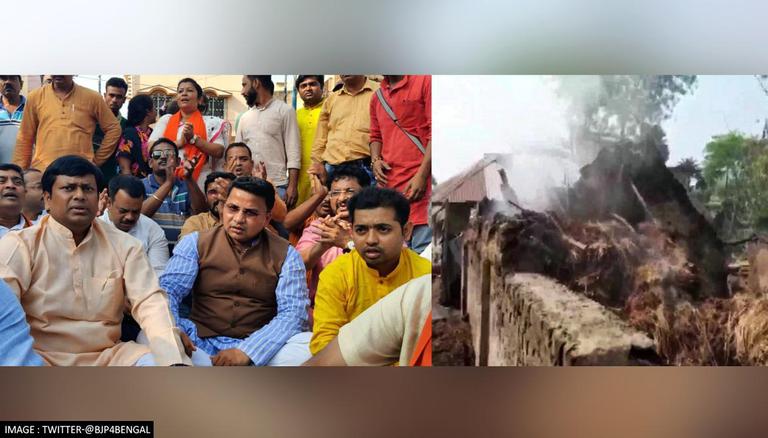 
The second delegation of the Bengal BJP leaders who rushed to Birbhum’s Bogtui was reportedly stopped in Sainthia before being escorted to the village that had witnessed a massacre two days ago. On Thursday, March 24, the BJP delegation including senior leader Sukanta Majumdar visiting kin of victims of the horrendous attack in Rampurhat was allegedly stopped mid-way, the saffron party claimed.

As per the BJP, they were stopped on the orders of the ruling Trinamool Congress. This was the second delegation that was sent to understand the situation on the ground and consisted of members of BJP’s national team and ex-IPS officers.

Earlier, a day ago, another BJP delegation, led by the Leader of opposition Suvendu Adhikar met with the kins of victims and offered their support to bring justice to them.

The saffron party has termed the gruesome incident ‘revenge killing’ of BJP workers post the murder of the Deputy Panchayat Chief (TMC leader). In a press conference, BJP spokesperson Sambit Patra said that "the whole country is concerned about this incident as it has shaken humanity. West Bengal government should have taken steps to prevent the incident."

Besides, other than BJP, Congress has also claimed that their leaders were not allowed to visit the Bogtui village. A delegation led by the Leader of the Opposition in Lok Sabha Adhir Ranjan Chowdhury was allegedly stopped mid-way.

West Bengal CM Mamata Banerjee will visit the area in view of violence that killed about 8 people. pic.twitter.com/Gs1GQiwazg

With citizens enraged over the ghastly killings in Birbhum, the site of the incident has become a political hotspot as the delegations of all political parties are rushing to console the victims whose family members were burnt alive in a rage of alleged political rivalry.

Earlier in the day, West Bengal CM Mamata Banerjee met with the kins of victims of the Birbhum violence in Rampurhat. She also handed over a cheque of Rs 5 lakh to the kin of those killed in the incident. TMC supremo Banerjee consoled the deceased's kin, handing over a bottle of water to the crying family.

Eight people, including two children, were charred to death in Rampurhat on Tuesday, following the murder of its panchayat deputy chief Bhadu Sheikh.

Apart from this, a delegation of TMC MPs, including Derek O' Brien and Mahua Moitra, met Home Minister Amit Shah to discuss the course of investigation in the Birbhum tragedy. The ghastly attack is being investigated thoroughly as it had gutted innocent children in the rage of political violence. The post mortem report had informed that the victims were mercilessly beaten before being burnt alive.