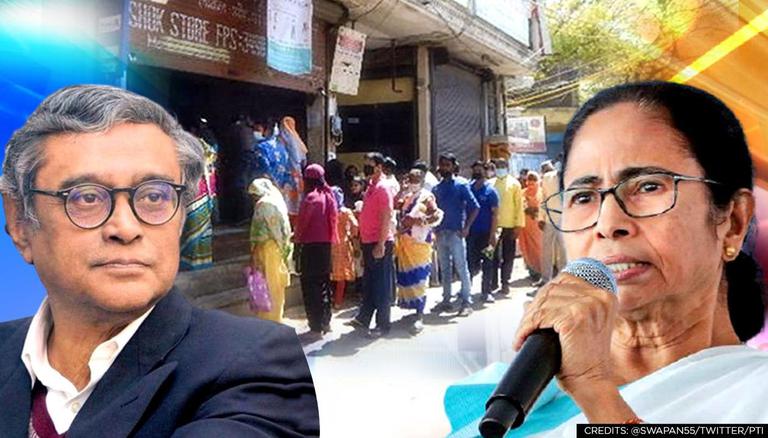 
As West Bengal witnessed incidents of widespread post-poll violence with several BJP grassroots workers and Left Cadre being at the receiving end, BJP leader Swapan Dasgupta has claimed that BJP workers in West Bengal are now being deprived of the free ration sanctioned by the Centre in the wake of the COVID-19 pandemic. Dasgupta alleged that ration shops are being given the list of people who will not be permitted the ration entitled to them.

A new form of intimidation of BJP workers in WBengal is to deprive them of the free rations sanctioned by the Modi government. The ration shops are being given lists of people who will not be permitted to access their food entitlements until they “surrender” to the Trinamool Cong

The Calcutta High Court on Thursday demanded the Mamata Banerjee led-government to file a report in three days over the post-poll violence in the state. The High Court has also directed the state government to specify names of areas where violence has broken out and the steps taken by the government to prevent violence.

This allegation comes in the backdrop of post-poll violence in the state which broke out while the election trends showed the Trinamool Congress winning by a substantial margin. BJP has said several workers of the saffron party were killed by the "TMC goons". The BJP has also alleged that the TMC cadre was torching the houses and damaging the properties of BJP leaders who had contested the polls. Several BJP leaders and workers have been selectively targeted by the ruling party cadre as Nadda said the violence reminded of the Direct Action Day of 1946.

Houses and vehicles of some BJP candidates were allegedly attacked and a BJP office at Arambagh was set ablaze. Both the BJP and the Left have confirmed reports of attacks on their party cadre. Hundreds of the BJP supporters and workers have fled the state and have taken refuge in Assam in the light of the violence. There have been reports of women being targeted as well. However, on the other hand, the TMC has called that the visuals of violence as outdated and fake.

According to JP Nadda, at least 14 BJP workers have lost their lives and nearly one lakh people fled their homes in post-poll violence in West Bengal. The vehicle of Suvendu Adhikari, who defeated Mamata Banerjee in Nandigram, was also attacked. A BJP office in Siuri was ransacked and the local leader’s tractor was set ablaze, while in Kolkata’s Beleghata constituency, the BJP candidate’s garage was set on fire. BJP candidate Mihir Goswami's car was damaged as he won against senior TMC leader Rabindranath Ghosh in the Natabari constituency.

Union Minister V Muraleedharan's convoy was attacked when he visited the state to take stock of the situation arising out of post-poll violence. Although he barely managed to escape the violent attack, his driver sustained injuries. He had to cut short his trip after the attack on his convoy. The Ministry of Home Affairs (MHA) had sent a four-member team to make a detailed report on the violence as well as meet the victims of the alleged brutality. Meanwhile, Mamata Banerjee has refuted the allegations of TMC Cadre targeting the opposition and promised Rs 2 lakh as compensation to the families of the victims.

READ | Mamata Banerjee rules out total lockdown; asserts 'there is no violence in West Bengal'
First Published: 10th May, 2021 18:49 IST
SUBSCRIBE TO US