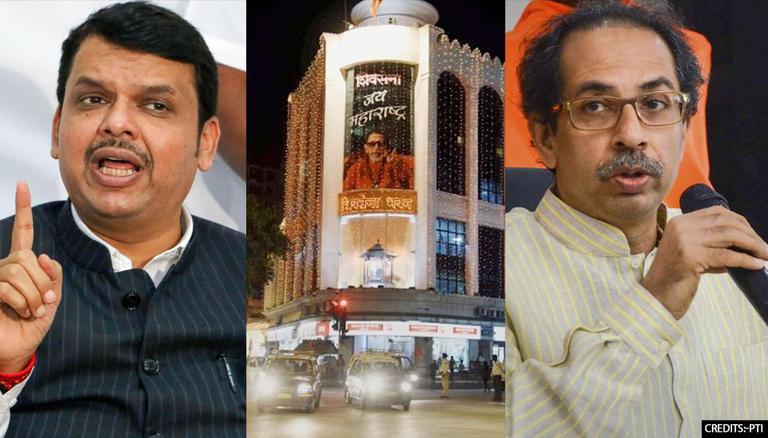 
War of words ensued over BJP MLC Prasad Lad's 'threat' to attack Shiv Sena Bhawan as Maharashtra CM Uddhav Thackeray warned against threatening Sena. Responding to Thackeray's threat, ex-CM Devendra Fadnavis on Sunday said that Prasad Lad had already clarified his comment and that the issue was over from their side. Lad had allegedly threatened an 'attack' on Shiv Sena Bhawan while inaugurating a BJP office in Mahim, which has since then been rescinded.

"Destroying is not the culture of the Bharatiya Janata Party. Prasad Lad has also given its clarification by releasing a video. This issue is over from our side. We don't tease anyone without reason. If someone teases us, do not leave them," said Fadnavis.

Angered at a threat to his party office, Shiv Sena Supremo Uddhav Thackeray issued a warning against threatening Sena on Sunday. Addressing the foundation stone-laying program of BBD chawl redevelopment, Thackeray said that those who threaten to slap us, will receive twice the amount of slaps. BJP had inaugurated a party office in Mahim near where Shiv Sena Bhawan is located and was warned by the police to not hold any rally in the area.

"There is that dialogue, I am not afraid of slaps… but we have been taking and giving such slaps. We have always slapped twice as many as we have got. I will give further. So don't threaten to slap us. I will give one slap that you will never be able to get up again". Shocked at the CM's remark, BJP questioned, "Does this uncultured language suit the Chief Minister of a civilized Maharashtra? Be aware that you are not speaking at the Sena's Dussehra rally but at the government program".

The issue started on Saturday, when Lad addressed party workers at BJP's new Mahim office saying, "Whenever I come here a huge police force is deployed. The Shiv Sena fears we will demolish their Sena Bhavan. Well, if the time comes we can do that too”.

Met with a storm of words, Lad apologised for his remark, tweeting, "I wish to clarify that there is no need for discussion. Shiv Sena chief (Balasaheb Thackeray) is loved and respected by all, irrespective of any party, In my speech I clearly said, when we come to Dadar-Mahim, there is so much police security as if we are going to attack Shiv Sena Bhawan. I don't wish to insult Shiv Sena chief (Balasaheb) or Sena Bhawan in any way. If I hurt anyone's feelings, I wish to apologise."