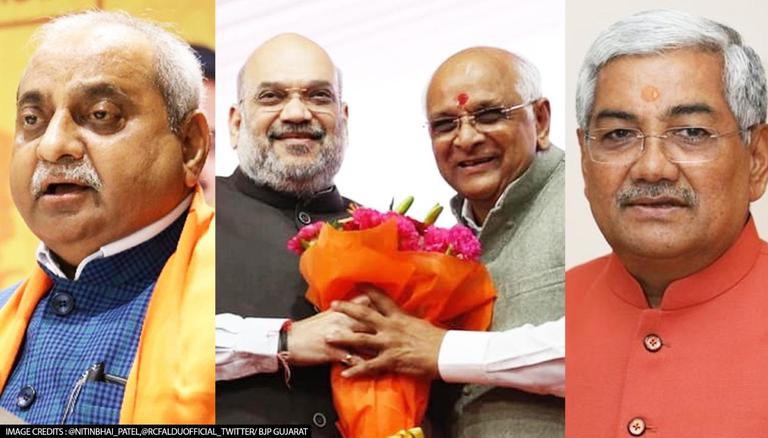 
In a massive scoop from Gujarat, sources on Wednesday, reported that deputy CM Nitin Patel, Bhupendrasinh Chudasama, Vibhavaru Ben may be dropped from the new cabinet. Sources add that Union Minister Bhupendra Yadav met with the current cabinet and hinted to them of being dropped. Sources added that the swearing-in ceremony of the new cabinet will likely be held at Raj Bhavan at 4 PM.

Dy CM Nitin Patel to be dropped from cabinet

In a shocking development, on Saturday, Gujarat Chief Minister Vijay Rupani submitted his resignation to the Governor and said that he is ready to take new responsibilities in the party. Rupani, who has completed five years in the post, has been replaced 15 months before the elections. With  BJP top brass -  Union Ministers Prahlad Joshi, Bhupendra Yadav, Mansukh Mandaviya, Narendra Singh Tomar and Gujarat leader CR Paatil, Nitin Patel huddling in Ahmedabad to discuss the new CM, first time MLA and ex-CM Anandiben Patel's close aide Bhupendra Patel was chosen as the CM pick. Rupani himself replaced Anandiben Patel in 2016 ahead of Gujarat polls in 2017 and completed a five-year term.

Belonging to the dominant Patidar caste, Patel is a first-time MLA who trounced his Congress opponent in Ghatlodia by a margin of 1,17,750 votes in 2017. Bhupendra Patel is perceived to be a close aide of Anandiben Patel and implemented then-CM Modi's Gujarat model. Having faced a backlash over the Patidar agitation, Patel's appointment is seen as BJP's attempt to bolster their chances for re-election in the 2022 Assembly election.

Prior to this, 45-year-old Pushkar Singh Dhami took over as the new Uttarakhand CM after Tirath Singh Rawat resigned citing 'constitutional constraints'. Rawat himself replaced Trivendra Singh Rawat in March 2021, ten days before the completion of his govt's 4 years, amid resentment among cabinet members. Similarly, Basavaraj Bommai took over from veteran Yediyurappa in Karnataka after massive opposition from miffed BJP leaders since cabinet expansion in January after rebel JD(S) and Congress MLAs were inducted into it. After Assam poll victory, BJP chose Himanta Biswa Sarma as its pick while incumbent CM Sarbananda Sonowal was inducted into the Union cabinet.