BJP Hits Out At Congress, JDS Over Agnipath Protests; 'they Are Undermining Forces'

Lashing out at Congress & JDS over the violent protest held against Agnipath, Shehzad Poonawalla stressed that political parties are 'undermining the forces.' 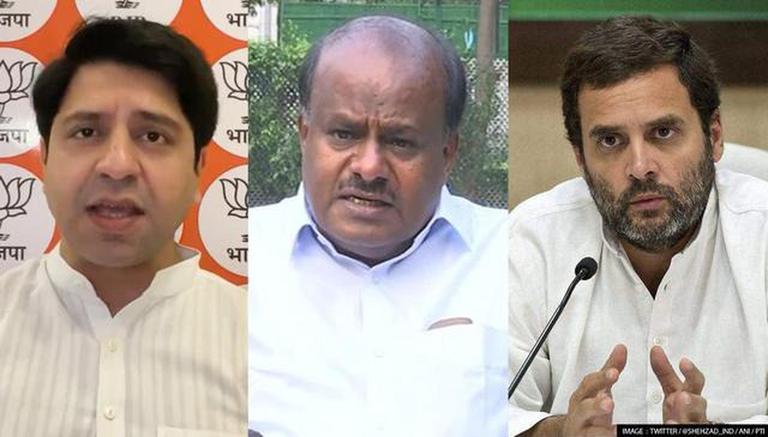 
Following JDS leader and former Karnataka CM HD Kumaraswamy's controversial remarks wherein he compared Agniveers to Nazis, BJP spokesperson Shehzad Poonawalla on Monday, June 20, condemned the comparison and stated that this is a deliberate remark. Lashing out at Congress and JDS over the violent protest held against the Agnipath recruitment scheme, the BJP leader stressed that the political parties are 'undermining the forces.'

Speaking to the reporters, Kumarswamy stated that the Agnipath scheme might be a "hidden agenda" of RSS to take control of the Indian Army like the Nazi Party in Germany during the Adolf Hitler regime.

Responding to the remark, Shehzad Poonawalla told Republic TV, "This comparision with Nazis is done deliberately. This shows the mindset of JDS and Congress".

He further added that the violent protest witnessed in the country over the Agnipath scheme is being 'sponsored by AICC mindset'. The BJP leader further mentioned that "Road Jalo, Danga Karao" is the mindset of RJD.

Meanwhile, responding to Congress leader Irfan Ansari's remark wherein he stated that Agniveers will become supari killers after 4 years, Shehzad Poonawalla questioned saying, "Is this not an insult to Armed Forces more than anything else?" He added, "These are the bunch who called Army Chief “Sadak Ka Gunda”.

It is pertinent to note that apart from Kumaraswamay an array of reactions from various political fronts surfaced in recent days over the military recruitment scheme, many drawing controversies as well. A day earlier, Congress MLA Irfan Ansari stoked controversy by warning of "bloodshed" over the Agnipath recruitment scheme. On Sunday, Ansari had targeted Prime Minister Narendra Modi over the recruitment scheme for army aspirants and said the youth will oppose Agnipath at all costs.

Another controversial remark surrounding the scheme was when former Jharkhand MP Subodh Kant Sahay, who was also a Union Minister, while addressing a public rally said that BJP is the party of 'goons' and claimed that the 'Prime Minister is spreading dictatorship across the country'. He compared PM Modi's governance to that of Hitler and asserted that if he will 'follow the path of Hitler then he will die like him'.

Meanwhile, Congress leader Salman Khurshid on Monday questioned the character of the Indian armed forces amid protest over the Agnipath scheme of recruitment for defence services. On the other hand, fearmongering over Agnipath, West Bengal Chief Minister Mamata Banerjee alleged that BJP was trying to create its own armed cadre base through this scheme.

The Centre on Tuesday, June 14, unveiled the Agnipath scheme for recruiting soldiers across the three services for a four-year period followed by compulsory retirement for most without gratuity and pension benefits.

Defence Minister Rajnath Singh and the three service chiefs on Tuesday announced the enrollment of the scheme which will be all-India and all-class and will form a distinct rank in the armed forces, besides having distinctive insignia.

After the policy was announced on June 14, violent protests were reported across several states of India including Bihar, Telangana, Uttar Pradesh, and others over the Agnipath scheme, concerned about job security and pension. Angry mobs protesting against the Centre’s Agnipath yojana set the trains on fire, railway stations were vandalised and roads were blocked.

In a related update, Congress is holding a sit-in protest at Jantar Mantra in Delhi against the Agnipath recruitment scheme. Congress leader Ajay Maken told reporters on Monday, “We will sit on Satyagraha at Jantar Mantar today, and in the evening at 5 pm, we will meet the President and demand that the Agnipath scheme be withdrawn".