A BJP delegation called on MP Governor Lalji Tandon at the Raj Bhavan demanding a stay on the decisions taken by the Kamal Nath government in the last 3 days.

On Tuesday, a BJP delegation called on Madhya Pradesh Governor Lalji Tandon at the Raj Bhavan in Bhopal demanding a stay on the decisions taken by the Kamal Nath government in the last three days. Initially, the BJP leaders maintained that the MP government was avoiding a floor test by citing different reasons. Thereafter, they alleged that the State government was making constitutional appointments despite being in minority. Highlighting that the Governor had the power to stay the appointments under Article 163 and 166 of the Constitution, the BJP delegation asked him to direct Chief Minister Kamal Nath not to misuse his powers.

Read the full letter of the BJP delegation here: 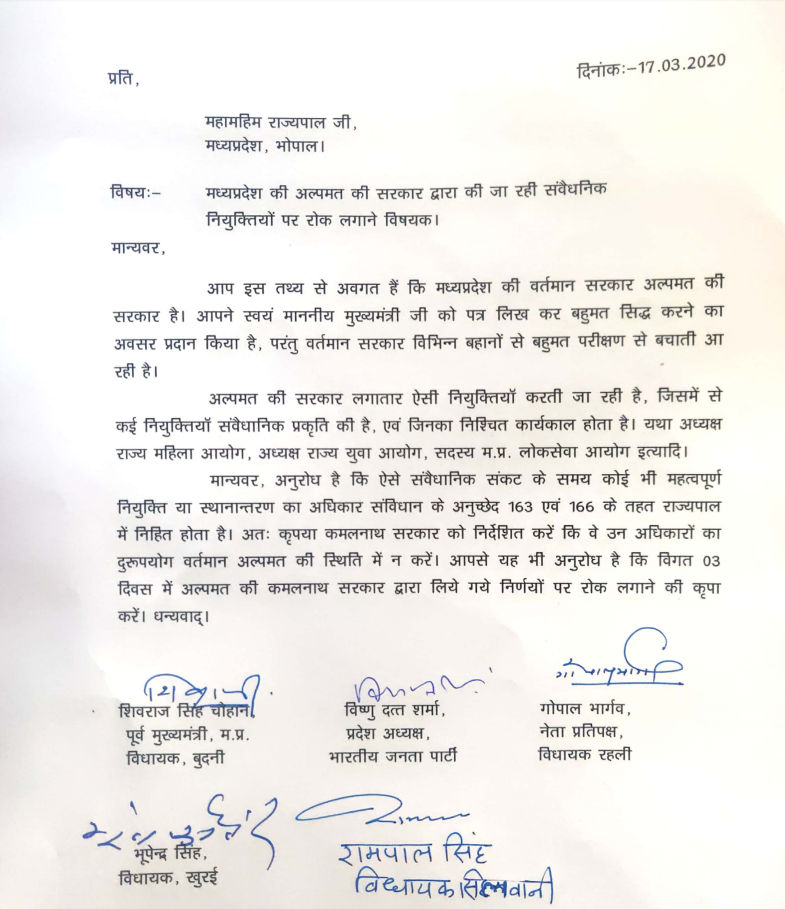 Scindia’s sudden resignation from the Congress party on March 10 was followed by 22 Madhya Pradesh Congress MLAs putting in their papers. Even as Assembly Speaker NP Prajapati has accepted the resignation of 6 MLAs, Congress is making all possible attempts to woo back some of the dissident MLAs as the stability of its government is in serious threat. On March 11, Scindia officially joined BJP in the presence of party president JP Nadda and was nominated as the party's Rajya Sabha candidate.

On March 14, a BJP delegation met Lalji Tandon and sought the Assembly session to be convened before March 16 so that a floor test could be held. This was followed by the MP CM seeking Union Home Minister Amit Shah's intervention in the safe return of the Congress MLAs allegedly held captive in Bengaluru. Finally, the Governor directed the Speaker to conduct a floor test on March 16, the first day of the budget session.

However, the Speaker adjourned the Assembly till March 26 in view of the novel coronavirus crisis without conducting the floor test. Subsequently, BJP leaders including Shivraj Singh Chouhan moved the Supreme Court seeking a direction for the floor test to be expedited. After issuing notice to Kamal Nath and Speaker Prajapati, the SC listed the matter for hearing on March 18. Meanwhile, the MP Congress also approached the apex court accusing BJP of kidnapping its MLAs and sought their release from "captivity".