BJP MP Locket Chhaterjee named Mamata Banerjee and alleged that she is 'running the extortion industry in West Bengal with the help of her MLAs and cadre. 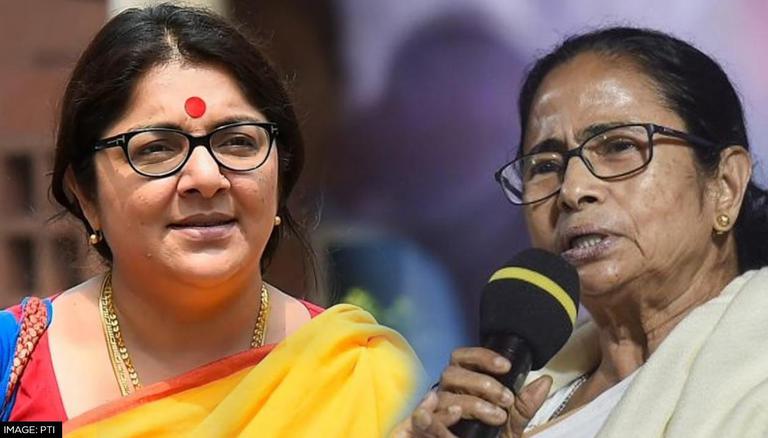 
The Bharatiya Janta Party (BJP) has levelled serious allegations against the Mamata Banerjee-led Trinamool Congress (TMC). On Friday, BJP General Secretary of West Bengal and MP Locket Chatterjee took to Twitter and attached a mail from a Kolkata-based company alleging an extortion racket. Chatterjee has claimed that she has 'evidence' and alleged that a TMC MLA and MP are involved in the extortion racket. She added that the state has a 'widespread act of organised extortion'.

"The business of tolabaazi is going on continuously in the state," she said.

'Tolabaazi', is a term often used against the TMC in the state. It is roughly understood as an act of organised extortion, in local parlance. "When a businessman undertakes a project in Bengal, then the TMC syndicate in return demands their share of the money. This is not only the matter of my area Hooghly but the whole of Bengal," Chatterjee added.

Taking to Twitter she explicitly named Mamata Banerjee and alleged that she is 'running the extortion industry in West Bengal with the help of her MLAs and party cadres'. She further added that this is the reason why West Bengal 'reeks of backwardness'. In her tweets, Locket Chatterjee has shared a snip of the mail allegedly sent by members of the Kolkata-based Purti Group who have claimed that three of their employees were also kidnapped. In the mail, the persons have alleged that people close to the TMC thrashed their employees and kidnapped some of them who are being held hostage near Durgapur expressway.

A glaring example of how a businessman became a victim of extortion. His employees got kidnapped!

It shows how Mamata Banerjee is running the extortion industry in West Bengal with the help of her MLA’s and party cadres. The prime reason why Bengal reeks of backwardness! pic.twitter.com/dsQiHlC1uH

Ahead of the upcoming civic body polls in Tripura and Assembly elections in Goa, where the TMC has planned to contest, Chatterjee has questioned if the TMC will 'run the same business of extortion' there. She further added that extortion has been going on in West Bengal for the last 10 years.

"Will Mamta Banerjee run the same business of extortion and loot in Goa and Tripura? This has been going on in Bengal for the last 10 years and is still going on. No industry will come here. You (Mamata Banerjee) are lying that industries are coming here. This is the condition of industries here," said Chatterjee.

Meanwhile, on the allegations of the kidnapping incident, she said that she has not yet spoken to the members of the firm but added, "They have written in the mail that they have asked for 50,000 T-shirts which amounts to Rs 35 lakhs. Why would they give?"