According to Nishikant Dubey, cryptocurrency might function as a medium to promote the usage of drugs, prostitution, and terrorism. 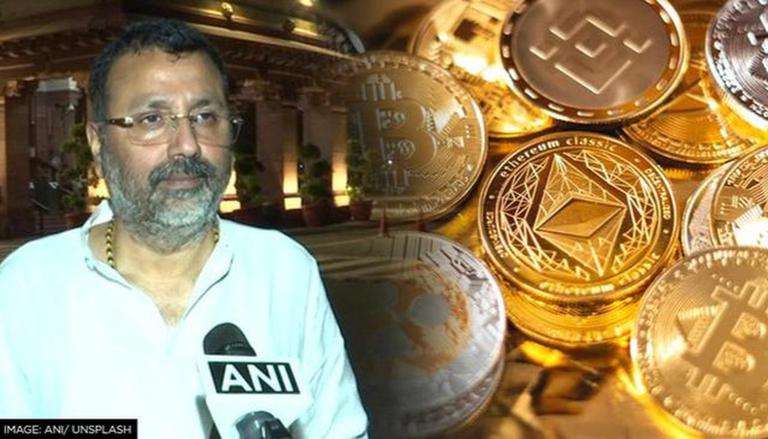 
BJP MP Nishikant Dubey on Monday, December 6, asserted that cryptocurrencies are on darknet technology and further sought a ban on them. According to Nishikant Dubey, cryptocurrency might function as a medium to promote the usage of drugs, prostitution, and terrorism. Raising the issue during the Zero Hour in the Lok Sabha, he linked the country's situation to cryptocurrencies with "Tulip Mania" in Holland in the 1600s.

Dubey said, "From 2013-14, our member Shivkumar Udasi has been contending that this should be stopped, it is based on darknet technology and this would only be used for drugs, prostitution, terrorism, arms."

Stating that the entire world has been facing problems with cryptocurrency, he said that the Reserve Bank of India (RBI) has been repeatedly urging for the complete ban of the digital currency.

He further questioned the authenticity of the technology used in cryptocurrency and said, "Nobody owns blockchain technology and if there is no owner, how will its activity be controlled."

Responding to a question on cryptocurrencies in Rajya Sabha, FM Sitharaman said, "This is a risky area and not in a complete regulatory framework. No decision was taken on banning its advisements. Steps are taken to create awareness through RBI and SEBI. The government will soon introduce a Bill."

She also said that as of now, no decision has been taken concerning the ban of digital currencies advertisements. She added that one must wait for the bill as extensive discussions on the regulatory capacity of cryptocurrencies have been conducted.

Earlier on November 29, Union Finance Minister Sitharaman had said that the Centre has no proposal to recognise Bitcoin as a currency in India. She also informed the House that data on Bitcoin transactions is not collected by the government.

The Cryptocurrency and Regulation of Official Digital Currency Bill 2021 seeks to ban all private cryptocurrencies except to promote the underlying technologies while allowing an official digital currency by RBI.

WE RECOMMEND
Don't want to be in hoardings, says BJP MLA Hiraan
What happened to Crypto Market today? What made market crash? All you need to know
Private Cryptocurrency list: What is private cryptocurrency? here's all you need to know
Kerala BJP accuses PFI's political wing SDPI of pasting 'I am Babari' stickers on kids
BJP will never topple govt, says Shah; dares Cong to call early polls in Rajasthan