Amid the row over President Murmu's insult, BJP MP Saumitra Khan on Saturday wrote a letter to the NCW and demanded the immediate arrest of TMC neta Akhil Giri. 
After a prominent leader from Mamata Banerjee's cabinet, Akhil Giri, sparked a massive controversy over his most depraved, sexist, and hateful remark against President of India Droupadi Murmu, BJP has now demanded the arrest of the TMC leader.

This has come at a time when Akhil Giri was addressing a rally and while making a verbal attack on TMC-turned-BJP leader and Bengal LoP Suvendu Adhikari and dragged in President Murmu’s name and uncouthly and offhandedly insulted her. "He (Suvendu) says, I am not good-looking. (Laughs) How beautiful you are! Good looking... We don't judge looks. We respect the chair of your President (Rashtrapati). How does your President (Rashtrapati) look?", Akhil Giri outrageously said, gesticulating and chortling.

Amid the insult row, BJP MP Saumitra Khan has written a letter to the National Commission for Women (NCW) and requested them to take cognisance of the situation by arresting and taking stern action against him. In his letter, the saffron party leader stated that this heinous act by Akhil Giri should not be forgiven in any situation as the insult of President Murmu is an insult to women empowerment, the Indian Democratic system, and an insult to the entire 140 crores people of the country.

"Akhil Giri has collectively commented about our Excellency the President. It is a very despicable act, it cannot be forgiven under any circumstances, nor can be left at any point. This issue is not only related to women's respect, it also reflects their thinking. And this type of thinking cannot be left in society because it is harmful to society as well as the country.

"Therefore, you are requested to immediately arrest Akhil Giri for his heinous act and take appropriate action against him and try to dismiss him from the MLA post also because society also doesn't want this kind of mindset". 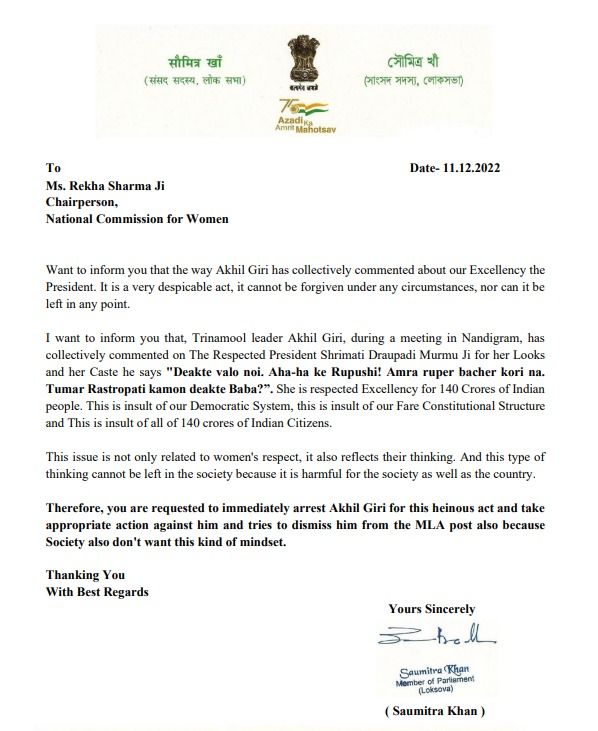 After Republic TV's coverage, Union Minister Dharmendra Pradhan targeted CM Mamata Banerjee and demanded that she sack her minister who insulted the first citizen of India. Taking to Twitter, the Union Minister said, "The first citizen of the country, the first President from the tribal community, and a woman was insulted by this petty, blunt man. If he still remains in Mamata Banerjee's cabinet, then she should resign. The continuation of Akhil Giri on the ministerial post is an insult to women and the entire country".

Majumdar added, "Our seven Scheduled Tribes MLAs will file a complaint against this minister in their respective constituency's police station. This is a derogatory comment against the responsible person and the case under the SC/ST act should be filed. He should be punished as per the law of the country and the Mamata Banerjee government is totally Ant-Adivasis".