BJP Pans Cong As Sonia, Rahul Get ED Notice In National Herald Case; 'No One Above Law'

After ED gave notice to Sonia and Rahul Gandhi in the National Herald case, BJP slammed them and said that Congress, corruption and commission go together. 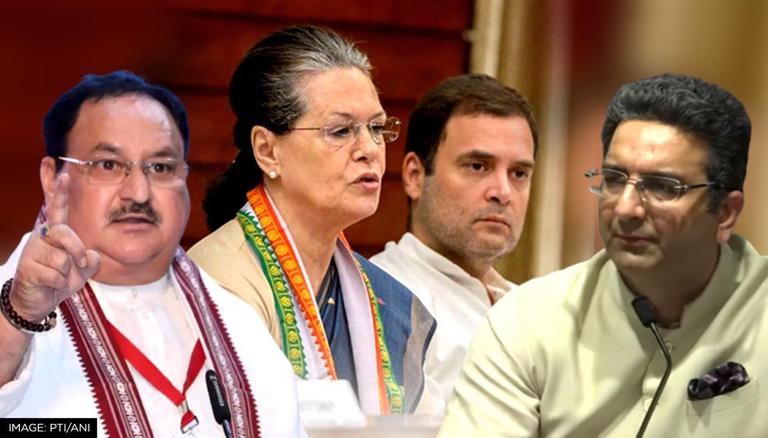 
After the Enforcement Directorate (ED) issued a notice to Congress president Sonia Gandhi and Wayanad MP Rahul Gandhi in the National Herald case, the Bharatiya Janata Party (BJP) slammed the mother-son duo and said that the Congress and corruption go together.

Speaking to exclusively to Republic TV on the ED's notice to Sonia and Rahul Gandhi, BJP spokesperson Gaurav Bhatia said, "A strong message has gone out that no one is above the law of the country, not even the Gandhi family. If you indulge in corruption, you have to pay the consequences. The ED is acting fearlessly and independently and no one should have any problem with that. I would also like to remind the Gandhi family that they are out on bail in the same matter. And now the ED is probing the money laundering angle. During the congress regime, the investigating agencies were called caged parrots by the honourable Supreme Court. Now, these agencies are acting independently."

BJP leader Shehzad Poonawalla slammed the Congress Party and said that the INC of the Congress stands for 'I Need Corruption'.

Speaking to Republic TV on the corruption charges against Rahul and Sonia Gandhi in the National Herald case, Poonawalla said, "It was like Janta ka maal Sonia aur Rahul ke jeb mein daal (put the money of people in the pocket of Sonia and Rahul). These people were the same people till yesterday saying that if there is something then why don’t you act on us. And when the action is taken, then they are saying ‘Why do you act on us?’ If they are so innocent and this is all vendetta, why didn’t they get a quashing order against the entire proceeding? Congress party has done A to Z corruption. Be it Adarsh scam, Bofors scam, election scam, 2G scam, IPL scam... My question is that when they went to the court for the relief, did they get it? No."

On Wednesday, Enforcement Directorate issued a notice to Congress' Sonia Gandhi and Rahul Gandhi in the National Herald case. Both of them are among the promoters and shareholders of Young Indian Pvt. Limited, which owns the National Herald newspaper.

Explaining details of the case, he remarked, "The fake issue of AJL is an attempt by BJP's propaganda machinery to deviate, diverge and digress the attention of the citizens from the multifarious vital issues of inflation, falling GDP, social unrest and social divisiveness in this country. By targeting National Herald every now and then, BJP has in fact disgraced, disrespected and dishonoured the freedom fighters, the stalwarts of this nation and their contribution to the freedom struggle where incidentally this particular party or its predecessors had absolutely no role to play. This is truly a very weird case."

According to the senior advocate, this was a strange money laundering case where summons have been issued despite no money being involved.

He added, "From 2014-2015 till today, the ED has not thought it fit to summon the Congress president and the former Congress president because they know that they have no material. Today, on the same facts- exactly the same acts and omissions, you are issued a summons in end of May 2022 by the ED to divert attention".

Founded by late Pandit Jawaharlal Nehru in 1938, the National Herald is published by the Associated Journals Limited (AJL).

In 2013, BJP MP Subramanian Swamy filed a private criminal complaint wherein he accused Sonia Gandhi, Rahul Gandhi and others of conspiring to cheat and misappropriate funds. He specifically highlighted that Young Indian Pvt. Limited paid only Rs.50 lakh to obtain the right to recover Rs.90.25 crore that Associated Journals Limited owed to Congress.

On December 19, 2015, the Gandhi mother-son duo got bail on furnishing a personal bond of Rs.50,000 each and a surety after the court ruled out apprehension that they will flee the country.