BJP President JP Nadda on Saturday summoned MP and Union Minister Giriraj Singh over his controversial remarks. The BJP leader has been asked to explain and justify various controversial statements made by him in the recent past.

The BJP leader has been in the spotlight a lot lately for his various controversial remarks during the recently-held Delhi Assembly Elections.

Earlier on February 12, Giriraj Singh made a shocking allegation that terrorist Hafiz Saeed was a product of Deoband. Terming the anti-CAA protests as a 'Khilafat movement,' he referred to Sharjeel Imam’s ‘Cut off Assam from India’ remark. Thereafter, he claimed that Muslims all over India were taking part in the Khilafat movement.

Giriraj Singh remarked, "I once said that Deoband is a Gangotri of terrorism. All the terrorists - Hafiz Saeed etc, they are the product of Deoband. They are not anti CAA, they are anti-India. It's a Khilafat Movement. Had it not been anti-India, then Sharjeel Imam would not have said to break India and Assam and urge India to become an Islamic Nation."

Giriraj Singh is infamous for coming under the radar through his controversial statements that are often seen as communal. In a similar incident on February 6, the Union Minister posted a video of burqa-clad women with a caption that read 'Shaheen Bagh is a hub of suicide-bombers'.

He further alleged that Shaheen Bagh 'conspires against the nation', and that 'suicide bombers are being trained. However, after receiving flak on social media, the leader quickly deleted his tweet within minutes 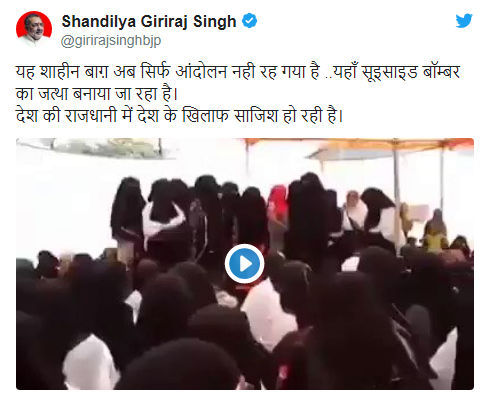 Earlier during Delhi Elections, the BJP MP had urged voters in the national capital to vote for BJP in order to save Delhi from becoming an 'Islamic State'. Singh took to Twitter and said, "Shaheen Bagh supporters have come out to vote for Kejriwal. My appeal to the people of Delhi is that if Shaheen Bagh has to be stopped, if Delhi has to be saved from becoming an Islamic state, then go out and vote for the BJP."