Ahead of the various by-polls for the state Legislative Assembly in various constituencies throughout the country, BJP, on Sunday, has released its list

Ahead of the various by-polls for the state Legislative Assembly in various constituencies throughout the country, BJP, on Sunday, has released its list of candidates contesting for the same. The saffron party has released the name of 36 candidates contesting for the seats. It has fielded candidates for seats in Assam, Bihar, Chhatisgarh, Himachal Pradesh, Kerala, Madhya Pradesh, Odisha, Punjab, Rajasthan, Sikkim, Telangana, and Uttar Pradesh. The list has been approved by BJP working president JP Nadda. 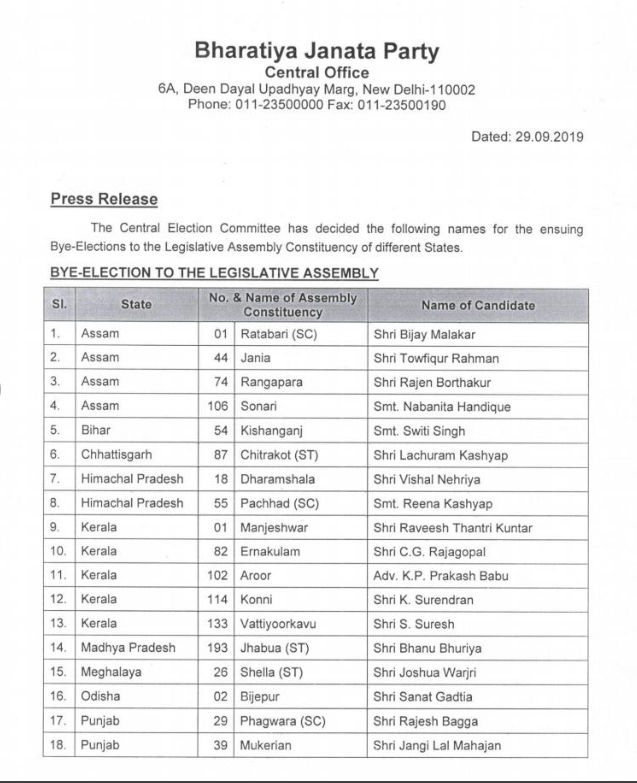 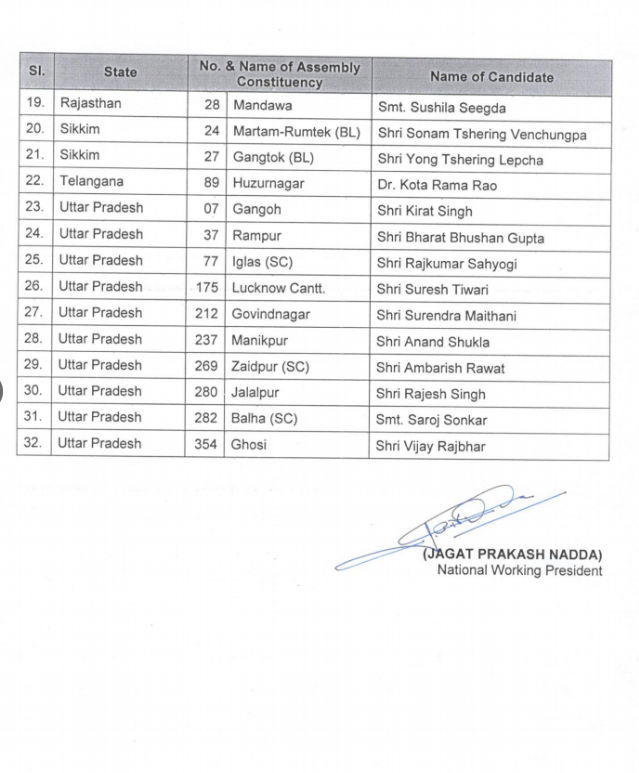 Earlier on September 21, Chief Election Commissioner (CEC) Sunil Arora announced the schedule of bypolls to be held across 64 constituencies in a press conference in New Delhi. The bypolls for the 64 constituencies are set to be conducted on October 21 along with the Maharashtra and Haryana Assembly Elections. The counting of the votes is scheduled for October 24. The entire process of bypolls is expected to be completed by October 27.

WATCH |Bypolls for 64 constituencies to be held on October 21: CEC Announces

64 constituencies to go for bypolls

CEC Arora announced that bypolls would be held for 64 constituencies across 17 states and one union territory (UT) of the country. Assam, Arunachal Pradesh, Bihar, Chhattisgarh, Gujarat, Himachal Pradesh, Karnataka, Kerala, Madhya Pradesh, Meghalaya, Odisha, Punjab, Rajasthan, Sikkim, Tamil Nadu, Telangana, Uttar Pradesh and Puducherry are the states and union territory, respectively, to go for the bypolls. Out of the 17 states set for the bypolls next month, Karnataka will have the polls for 15 seats which is the most out of all the states. Uttar Pradesh will conduct the polls for 11 seats and Bihar for 5. Madhya Pradesh, Meghalaya, Chattisgarh, Odisha, Arunachal Pradesh, and Telangana will have the polls for only one seat. Bypolls are held when to fill the seats that have become vacant before the next general election.

In a major development to the Karnataka by-polls, the Election Commission, on Friday, has announced that the election for the 15 seats will take place on December 5. The EC announced that the election's results will be declared on December 11. Meanwhile, the Supreme Court has maintained that it will continue to hear the rebel MLAs' plea against their disqualification by Speaker Ramesh Kumar on October 22. The Election Commission also released the entire schedule of the by-polls.