Reacting to the open display of the Khalistan sentiment in Punjab, Sirsa accused Arvind Kejriwal of taking 'open support' from the secessionist community. 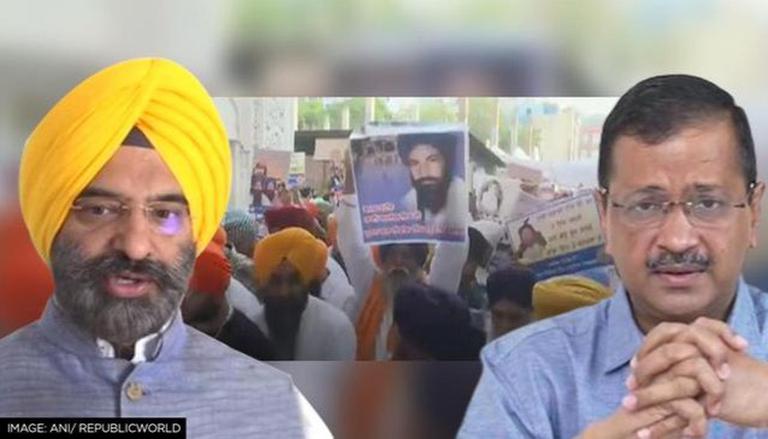 
In the aftermath of the Golden Temple shocker, Bhartiya Janata Party's (BJP) Manjinder Singh Sirsa lashed out at Delhi Chief Minister Arvind Kejriwal, accusing him of playing a 'big game' in Punjab. In a shocking development on Monday morning, a number of people protested at the entrance of the Golden Temple in Amritsar carrying posters of terrorist Jarnail Singh Bhindranwale. Moreover, pro-Khalistan slogans were chanted by the protesters marking the 38th anniversary of Operation Bluestar.

Reacting to the open display of the Khalistan sentiment in Punjab, Sirsa accused Kejriwal of taking 'open support' from the secessionist community ahead of the elections. He alleged that sentiments of one religion were being instigated for political benefits.

"In 2017, when there was an election, Kejriwal resided at their residence and took financial support from them. On one side, Kejriwal said we want security for Kashmiri pandits, but what is happening in his own state? They are instigating the sentiments of one religion so that a narrative is formed and he should get benefit from this. Kejriwal is playing a big game, by making an innocent face. Kejriwal justifies terrorists as well as victims, he is playing a big game," Manjinder Singh Sirsa alleged.

Notably, this is not the first time that the BJP has alleged that Kejriwal's Aam Aadmi Party (AAP) has links to pro-Khalistani elements. Previously, BJP's Tajinder Pal Singh Bagga had dared Punjab CM Bhagwant Mann to take action against pro-Khalistan protestors in the state. "Will you take action @BhagwantMann or do you need permission from your Delhi boss before taking action against Anti Indians?" he had tweeted.

The allegation had gained momentum ahead of the Punjab Assembly Elections in March when poet and former AAP leader Kumar Vishwas accused Kejriwal of supporting separatists in Punjab. Vishwas had claimed that Kejriwal told him that he will be either CM (of Punjab) or the first PM of an independent nation (Khalistan). Kejriwal’s overnight stay at the residence of ex-Khalistani militant Gurwinder Singh during the 2017 elections, had also drawn the ire of political parties.