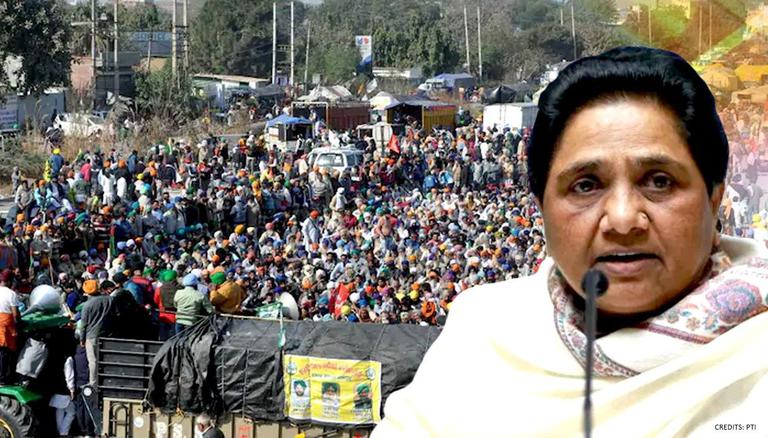 
BSP president Mayawati on Tuesday extended her support to the countrywide protest call given by the Samyukt Kisan Morcha (SKM) on May 26 against the agriculture reforms and asked the Centre to adopt a sympathetic attitude towards the farmer. This latest development comes as the protesting farmers said that they will observe a "Black Day" on May 26 to mark the completion of six months of their agitation. There is considerable apprehension regarding this protest, seeing as India is only now beginning to show signs of recovery from the second COVID wave.

Mayawati voices support for countrywide protest on May 26

Taking to her official Twitter handle, the BSP president said that the farmers of the country are continuously agitating amid the COVID-19 pandemic. Demanding the withdrawal of the three new contentious farm bills passed by the Centre, she said, "BSP support farmers' nationwide 'protest day' on May 26. The Centre needs to be sensitive towards them."

Accusing the Centre of adopting a confrontational attitude towards farmers, she said the deadlock has resulted in tensions especially in the neighbouring states. The BSP leader said that her party appeals to the Centre to negotiate with the agitating farmers and find a solution to their problems.

Meanwhile, several other political parties have also extended support to the farmers' protest call. Farmers have been camping at Delhi's borders since November last year, demanding the repeal of the Farmers' Produce Trade and Commerce (Promotion and Facilitation) Act, 2020; Farmers' (Empowerment and Protection) Agreement on Price Assurance and Farm Services Act, 2020; and the Essential Commodities (Amendment) Act, 2020.

The Samyukt Kisan Morcha (SKM), an umbrella body of over 40 protesting farmer unions, on Friday had written to Prime Minister Narendra Modi, urging for the resumption of talks. Several rounds of talks between farmers and the government had failed to break the deadlock over the legislations.

The Farmers' Produce Trade and Commerce (Promotion and Facilitation) Act, 2020 aims at freeing the farmers from the constraints of the state Agriculture Produce Market Committees whereby they would be able to sell their produce anywhere. Meanwhile, The Farmers (Empowerment and Protection) Agreement of Price Assurance and Farm Services Act, 2020 protects and empowers farmers to engage with processors, wholesalers, large retailers, exporters for farm services. The Essential Commodities (Amendment) Act, 2020 specifies that the supply of foodstuffs including cereals, pulses, potato, edible oilseeds, and oils shall be regulated only under exceptional circumstances.

READ | From COVID-19 norms violation to Farmers protest; Cases in Supreme Court on May 10

WE RECOMMEND
Mayawati extends support to farmers' protest call on May 26
BSP's Mayawati slams state govts for unprecedented migrant crisis; demands free vaccine
Abish Matthew accepts the sexism in his 2012 tweet on Mayawati; pens apology to all women
BSP performance encouraging despite official machinery misuse in UP panchayat polls: Mayawati
Why is 'Arrest Abish Mathew' trending? What did Abish Mathew tweet about Mayawati in 2012?