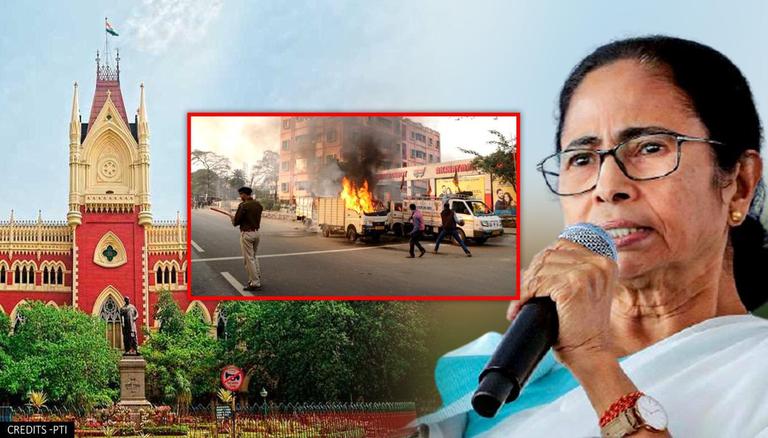 
Days after post-poll political violence rocked West Bengal and claimed 16 lives, a petitioner has moved the Calcutta High Court seeking urgent reliefs in relation to the widespread violence after TMC's victory in the recently concluded Assembly Elections. The petition, filed by social activist Susheel Kumar Pandey, accuses the State machinery of failing to protect life and liberty of its citizens and urged the court to direct the National Investigation Agency (NIA) to investigate the 'pogrom'. The Calcutta High Court is likely to take up the case for hearing next week.

The petitioner has claimed that close to 80,000 people - most of whom are or are suspected to be supporters of opposition parties - have fled to neighbouring states, implying the 'utter and deliberate failure of State machinery to protect their fundamental rights.' Notably, the petitioner has claimed that the State administration, led by the TMC government, and its police authorities failed to clamp down on the unruly elements and also refused to register complaints 'thereby leading to institutionalized violence and destruction of the democratic fabric of the State.'

"For a Government which is led by a woman, its apathy for the cruelty meted out to women supporters of other political parties merely for their political leanings and affiliations is shocking and must stir the conscience of every right-thinking individual and institution which is responsible for protecting the lives and dignities of people in the State," the petition reads.

Seeking directions to the State of Bengal, the petitioner has urged the High Court to showcause the state government for not registering complaints of violence victims and file a report on the steps taking to clamp down the violence that broke out right after the results of the Assembly elections were announced on May 2. The petitioner has prayed to issue direction to the State to respond on the steps taken to rehabilitate victims of the violence and immediately arrest all individuals involved in the heinous offences committed in the aftermath of the West Bengal Assembly Elections. Apart from this, the petitioner has urged the court to allow the deployment of central forces to restore law & order in the state and direct the State of Bengal to provide adequate compensation to victims of the families.

'No violence since May 9': WB govt

In an affidavit filed in the Calcutta HC late on May 10, the West Bengal government claimed that no violence was reported in the state from May 9 onwards. The Constitution Bench of the Calcutta High Court comprising Chief Justice Rajesh Bindal, Justices IP Mukerji, Harish Tandon, Soumen Sen and Subrata Talukdar had directed Advocate General Kishor Dutta to file a report on the law and order situation following post-poll violence. Dutta also assured the court that all possible steps shall be taken to ensure that peace prevails in the future too.

Maintaining that the issue pertaining to the maintainability of the writ petition shall be decided later on, the HC directed that copies of the affidavit should be furnished to the counsel of the petitioner, Additional Solicitor General and the EC. During the hearing, Additional Solicitor General YJ Dastoor asserted that the issue of post-poll violence was raised by multiple parties which contested the West Bengal Assembly election.

BJP, Congress, CPI(M), TMC and ISF have been up in arms over the violence which claimed 16 lives after the declaration of poll results. While the MHA sought a detailed report from the state government regarding the "post-election violence targeting opposition political workers in the state" and sent a 4-member team there, PM Modi called up Dhankhar and expressed his anguish at the law and order situation. Though TMC attributed the deaths to "intra-BJP fights", Banerjee requested everyone to remain peaceful.

Meanwhile, BJP president JP Nadda visited WB for two days where he met the families of the affected party workers in Pratapnagar, Beliaghata, North 24 Parganas and Gopalpur. In another development, CM Mamata Banerjee announced a compensation of Rs.2 lakh each to the kin of the deceased persons. She also warned that her government will act against anyone circulating "fake videos" on the post-poll violence.