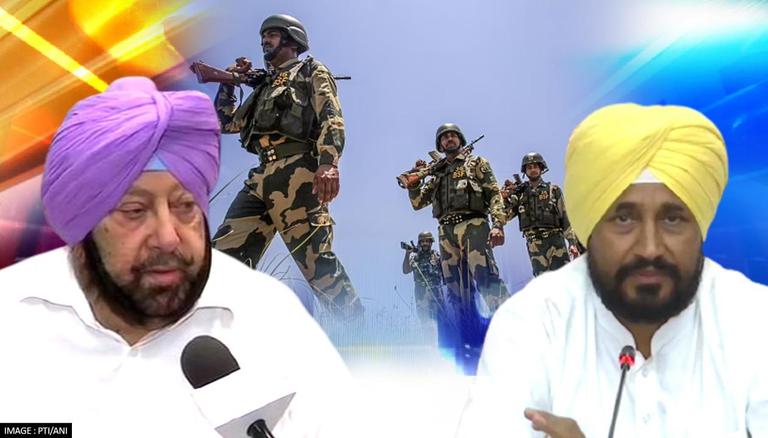 
Former Punjab Chief Minister Captain Amarinder Singh on Wednesday hit out at the CM Channi-led state government and lauded the Centre's decision to extend the jurisdiction of the Border Security Force (BSF). Citing the present situation in Kashmir when more & more weapons & drugs are being pushed by Pakistan-backed terrorists into Punjab, Captain Amarinder Singh asserted that the BSF’s enhanced presence & powers will only make the state stronger.

'Let’s not drag central armed forces into politics,’ Captain Amarinder Singh said, perhaps in a dig at the Punjab government which condemned Centre's decision as an effect of which the BSF's jurisdiction is now a “50 km belt” running parallel to the national border in the state. Previously, in accordance with Section 139 of the Border Security Force Act 1968, it was a 15 km belt. This implies that the BSF can now make arrests, carry out searches and seize materials in these areas, as well. This is akin to the state police.

Earlier in the day, the Punjab government dubbed the government's move as a 'direct attack on federalism'. Taking to his official Twitter handle, Chief Minister Charanjit Singh Channi condemned the 'irrational decision' and urged the Centre to 'roll it back' immediately.

Meanwhile, speaking to the media, the Deputy Chief Minister of Punjab Sukhjinder Singh Randhawa said that the interference in the federal structure cannot be compromised. "I appeal to Prime Minister Narendra Modi, Home Minister Amit Shah to consider this issue. Why to deploy the BSF inside 15km of fencing? Army or BSF never entered inside the state this far," he added.

I strongly condemn the GoI's unilateral decision to give additional powers to BSF within 50 KM belt running along the international borders, which is a direct attack on the federalism. I urge the Union Home Minister @AmitShah to immediately rollback this irrational decision.

As per an order released by the Centre, besides Punjab, in West Bengal, and Assam, BSF has now been authorised to take steps up to an area of 50 km inside the Indian territory from the International Border (IB) along Inda-Pakistan and India-Bangladesh borders without any hurdle or further permission either from the Centre or the state governments. Border stretch under BSF in Gujarat has been brought down from 80 km to 50 km. Meanwhile, in Rajasthan, the stretch under BSF remains unchanged.