There has been an attempt from various quarters of public discourse to call the repeal of farm laws a political move by BJP ahead of polls in UP & Punjab. 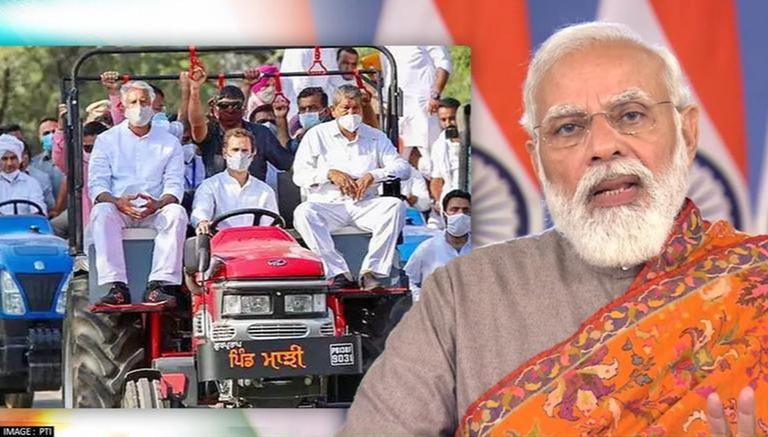 
Prime Minister Narendra Modi on Friday announced that the Centre will officially repeal the three contentious farm laws in the upcoming Winter session of Parliament, against which the farmers of the country had been protesting for over 1.5 years now. PM lamented that in spite of multiple levels of talks between the Centre and the farmers, a section remained unconvinced of the benefits of the farm laws.

Now, there has been an attempt from various quarters of public discourse to call this a political move by the BJP government for the upcoming Uttar Pradesh and Punjab elections. Congress' Priyanka Gandhi Vadra asked, "Why is he doing this? The Nation understands that polls are approaching and they might have felt that the situation isn't right. They can see in surveys that the situation isn't right. So, they have come to apologise before polls."

Also, the National Conference's Omar Abdullah called anyone believing that the farm laws were repealed out of the goodness of its heart mistaken. Taking to his official Twitter handle, Abdullah wrote, "This government only responds to cold hard numbers - bypoll setback = fuel price reduction. Poor internal polls numbers for Western UP & Punjab = Farmlawsrepealed".

AIMIM's Asaduddin Owaisi on similar lines, asserted, "Modi had seen writing on the wall in UP & Punjab, was left with no choice."

Farm laws repealed due to fear of loss in upcoming polls?

It is, however, to be noted that BJP has won many elections/seats after the farm laws were passed in the Parliament, though the prime states where the elections are likely to be impacted by the farm laws are yet to go to polls. In the assembly elections that took place in 2021, BJP won a majority in two of the five states/ union territories. In Assam, BJP won 60 of the 93 seats contested in Assam and formed the government for the second time with Himanta Biswa Sarma as the Chief Minister of the state. Similarly in Puducherry, BJP won 6 of the 9 seats contested in the 14 seat assembly, and for the first time ever became a part of the government in the Union Territory.

In West Bengal, where BKU chief Rakesh Tikait actively campaigned against the BJP, the party failed to breach the 200+ seats as was being claimed, but did considerably well as compared to its previous performance. The BJP won 77 seats out of the 291 contested in 2021 while in 2016 it had won 3 out of the 291 contested seats. In Tamil Nadu as well, BJP ended its 15-year-long wait to have a member in the Assembly, by winning four of the 20 seats contested in the state, though its endeavour was largely unsuccessful as its alliance with the AIADMK lost.

In Kerala, however, the plight of the party was not similar to that in West Bengal or Tamil Nadu as the party scored a duck. If something, the party ended up as runner-ups in 9 seats in the state.

In Maharashtra by-polls held in May 2021, BJP won the Pandharpur-Mangalvedha Assembly seat in the Solapur district. Then in Gujarat civic and panchayat polls held in October 2021,  BJP had won 41 out of 44 seats in the Gandhinagar Municipal Corporation (GMC) elections.  Apart from GMC, the Gujarat State Election Commission (SEC) had conducted general or mid-term elections of three municipalities and by-elections to two municipal corporations (3 seats), 39 municipalities (45 seats), seven district panchayats (8 seats) and 41 taluka panchayats (45 seats).

In the maiden District Development Council (DDC) election in Jammu and Kashmir, BJP had emerged as the single-largest party with 75 seats while the Gupkar alliance had emerged victorious with 112 seats after sweeping Kashmir in December 2020.

However, Punjab, Haryana and UP were always pegged as being states where the impact of the farmers' protest may be felt more, and hence, it remains a worthy debate as to whether they were a primary consideration behind the move.