On being named the All India Congress Committee (AICC) observer for Uttar Pradesh polls, Bhupesh Baghel on Saturday asserted that it was a 'big responsibility' 
On being named the All India Congress Committee (AICC) observer for Uttar Pradesh polls, Bhupesh Baghel on Saturday asserted that it was a 'big responsibility', and thanked party interim president Sonia Gandhi along with Rahul Gandhi and Priyanka Gandhi Vadra. The Chhattisgarh Chief Minister has been entrusted with the role of the  AICC observer amid reports of being replaced by TS Deo as the CM, following the 2.5 years agreement that the Congress party allegedly framed after the 2018 assembly elections.

'There's no such thing'

When asked about the air around the change in leadership in Chhattisgarh, Bhupesh Baghel tried to wave off the question with an awkward laugh. "Where do you get such news from? There's no such thing as is being continuously reported." The CM quickly added, "Next question please." He was addressing the media after an event arranged to pay tribute to freedom fighters Mahatma Gandhi and Lal Bahadur Shastri on their birth anniversaries.

Earlier in the day, the AICC released a notification that read," Hon'ble Congress President has appointed Shri Bhupesh Baghel, Chief Minister Chhattisgarh as AICC senior observer for the ensuing Assembly elections in Uttar Pradesh, with immediate effect." The notification of Bhupesh Baghel's appointment as the AICC observer came hours after Republic reported that Congress High Command has decided to change the CM during the upcoming Navratri festival. 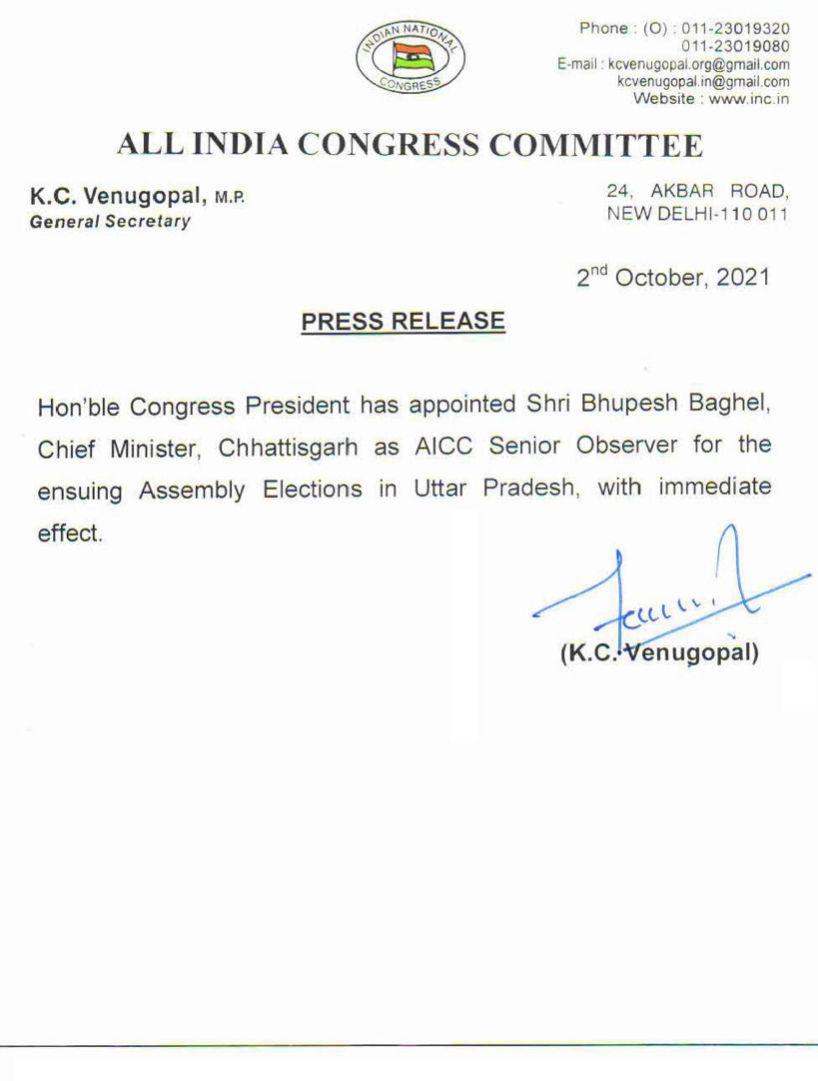 On Friday, sources reported that Bhupesh Baghel has claimed the support of Priyanka Gandhi Vadra, telling his supporters to stay put in Delhi. On the other hand, TS Singh Deo attested that Congress leader Rahul Gandhi was on his side and had promised to accord all support to him. Meanwhile, Congress state chief Mohan Markam refuted any 'political turmoil' in Congress.

In 2018 when Congress trumped the BJP winning 68 of 90 seats, there were four contenders for the post of Chief Minister- Bhupesh Baghel, TS Singh Deo, Tamradhwaj Sahu, and Charandas Mahant. After much brainstorming, Congress narrowed down to TS Deo and Bhupesh Baghel with Rahul Gandhi finally selecting Bhupesh Baghel for the top post. Sources said that Congress had agreed to divide the CM tenure between the two with each ruling 2.5 years. With Baghel now completing two-and-a-half years in his tenure, TS Singh Deo has already told Congress to hand over the top post to him within two months, as per the agreed formula.  Baghel on the other hand, has said that he would quit his post whenever either Sonia Gandhi or Rahul Gandhi tell him to do so. Ex-party chief Rahul Gandhi is set to undertake a 3-day tour of Bastar and Sarguja and decide on the tiff .