BJP leader and Rajya Sabha MP Subramanian Swamy on Saturday said India should go to war with China if the neighbouring country does not vacate Indian territory. 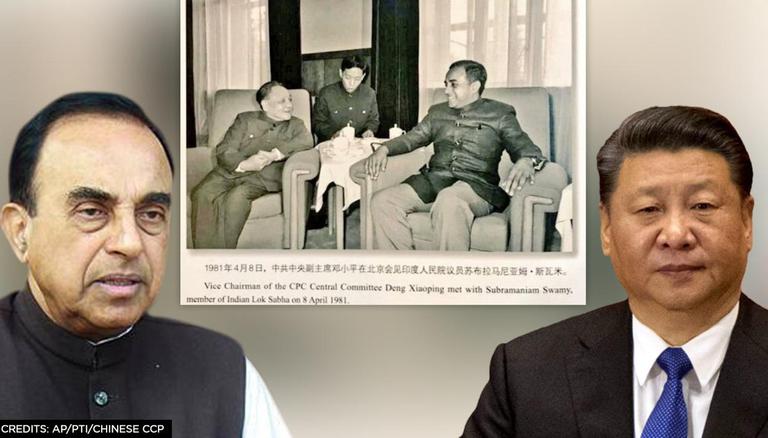 
BJP leader and Rajya Sabha MP Subramanian Swamy on Saturday said India should go to war with China if the neighbouring country does not vacate Indian territory and go back to the Line of Actual Control (LAC), which was mutually agreed upon by the two countries in 1993. This was followed by a prominent Chinese media stooge attacking Dr Swamy, not knowing of how the Rajya Sabha MP has helped China in its economic growth.

Dr Swamy had suggested that India should only focus on settling the border dispute with Beijing and not "provoke" the neighbouring country by talking about Hong Kong, Taiwan and Tibet.

The BJP leader was speaking at an event organised to release a book, titled "Blinkers Off, How Will The World Counter China", which is authored by Gaurie Dwivedi.

"China is an extraordinarily important and dangerous threat to India... Therefore, India has to be able to work out its strategy in such a way that it meets the threat and finally, puts China in its place," he said.

No more the India of 1962: Subramanian Swamy

Swamy noted that China has the "audacity" to occupy Indian territory while having extended meetings with the prime minister.

"My view is that India should tell the Chinese that if you are not going to go back to what was the original position in 1993, we will go to war with you. We need a battle with the Chinese unless they voluntarily agree to withdraw...teach China a lesson that we are no more the India of 1962," he said.

Suggesting that India should only focus on its land dispute with China, Swamy said talking about other issues will only aggravate the situation.

"Don't talk about Hong Kong, Taiwan and Tibet. All you are doing is aggravating the situation. Focus on where China has gone wrong. They have crossed the LAC and occupied parts of our land," he said.

Speaking at the event, Lieutenant General (retired) Sayed Ata Hasnain said there is a need to look at non-traditional threats from China such as those related to cyber security and economic threats.

"In India, we love to talk about the military aspects of this (Sino-India) relationship. Is war a distinct possibility with China in the near future? To my mind, no," he said.

Lieutenant General Hasnain, however, pointed out that it would be a "no-war-no-peace" situation like it is with Pakistan and if it continues, "it will be very dangerous for the posterity".

"That is what China will keep you in and it is something we will have to rethink on how to counter this particular strategy that China is applying to us," he added.

Chinese media stooge tries to attack Subramanian Swamy; gets sent to the cleaners

Dr Swamy's remarks were taken exception to by Chinese stooge and editor of state-run Global Times Hu Xijin, who tried to criticise the Rajya Sabha MP's knowledge of China and attempted to make an economic comparison between the two countries and put India down.

PLA is stationed on China's own territory. This Indian politician is so mad, and the Indian political system always mass produces such madmen. Today's India is indeed not the India of 1962. Today, India's GDP is 1/5 of China's GDP, and the two were roughly the same at that time. pic.twitter.com/WGFj175O98

Netizens were quick to correct his ignorance, however, as Subramanian Swamy has self-confessedly played a huge role in the economic growth of both India and China. After a paper Dr Swamy wrote during his time in the US as an academic enabled China to access a form of development fund, he was invited to Beijing by Deng Xiaoping who is credited with paving the way for China's growth. Dr Swamy was also part of the PV Narasimha Rao govt that liberalised India's economy.