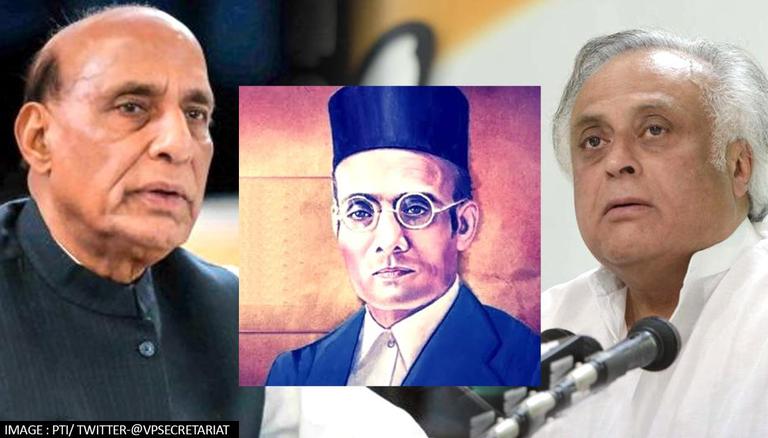 Rajnath Singh-ji is amongst the few sober & dignified voices in Modi Sarkar. But he doesnt seem to be free of RSS habit of rewriting history. He has given a twist to what Gandhi actually wrote on Jan 25 1920. Here is that letter to Savarkar’s brother. pic.twitter.com/E8Gxq59TxZ

On Tuesday, Rajnath Singh hailed Savarkar as a staunch nationalist and India's first military strategist in the 20th century. Moreover, he claimed that Savarkar's commitment for freedom was so strong that the British sentenced him to life imprisonment twice. He was speaking at the launch of a book on Savarkar - Veer Savarkar: The Man Who Could Have Prevented Partition, authored by Uday Mahurkar and Chirayu Pandit.

"Lies were spread about Savarkar repeatedly. It was spread that he filed many mercy petitions for seeking his release from jails.... It was Mahatma Gandhi who asked him to file the mercy petitions...," the defence minister said.

Discussing Savarkar's concept of Hindutva, he said the word "Hindu" for him was not associated with any religion and it was linked to India's geographical and political identity. For Savarkar, Hindutva was associated with cultural nationalism, he added. "For Savarkar, an ideal state was the one where its citizens were not differentiated on the basis of their culture and religion and therefore, there is a need to deeply understand his Hindutva," the veteran BJP leader said.

Taking umbrage at Singh's words, AIMIM chief Asaduddin Owaisi accused the BJP of distorting history to glorify the freedom fighter. He went on to say that the BJP will soon declare Savarkar as 'the father of the nation'. The AIMIM leader further stated that the first petition written by Savarkar was in 1911, just six months after getting into prison and Gandhi was then in South Africa. Savarkar pleaded mercy again in 1913/14 while Gandhi wrote the letter in 1920, he added.

"They (BJP) are presenting distorted history. If this continues, they will remove Mahatma Gandhi and make Savarkar, who was accused of Gandhiji's murder and was pronounced complicit in the inquiry of Justice Jeevan Lal Kapur, as the father of the nation," Owaisi said. He added, "In his view, India was not the holy land for Muslims & Christians and so they couldn’t be fully loyal to India. What is your view on this as Defence Minister?".