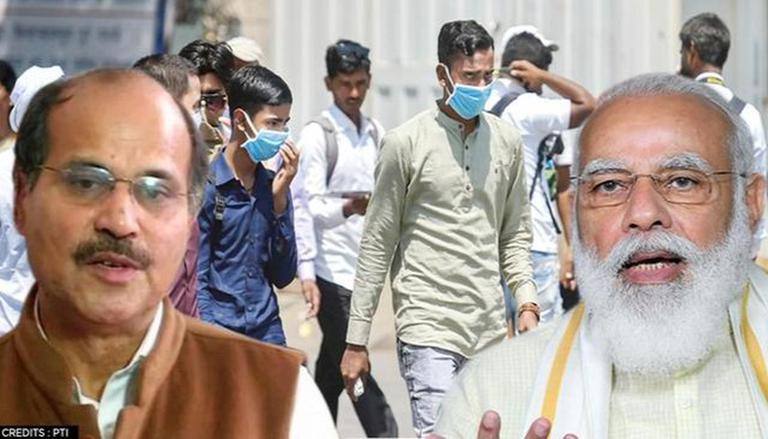 
Congress MP Adhir Ranjan Chowdhury urged the Union Government to transfer Rs 6000 to jobless people amid the lockdown imposed in states across India to curb the spread of COVID. The Congress Lok Sabha MP's letter to PM Modi came days after the leaders of 12 opposition parties sought Rs 6000 to be provided as financial relief to the poor & jobless among other suggestions to fight the second wave of COVID, including a brazen recommendation to repeal the farm laws. Congress MP Adhir Ranjan Chowdhury claimed that people had been rendered unemployed owing to the lockdown that has been imposed and pointed out that the jobless people felt 'abandoned' and 'helpless'.

Parroting Congress President Sonia Gandhi's suggestion, Adhir Ranjan Chowdhury requested the Centre to resort to direct bank transfer to provide Rs 6000 to the poor & downtrodden. The Congress leader urged the Union Govt to follow the suggestions of Sonia Gandhi and said that the money should be transferred to the bank accounts of the beneficiaries, including the people of West Bengal. Adhir Ranjan Chowdhury claimed that the move would not only mitigate the sufferings of millions but would have a 'multiplier' effect on the economy as it was 'good economics'. 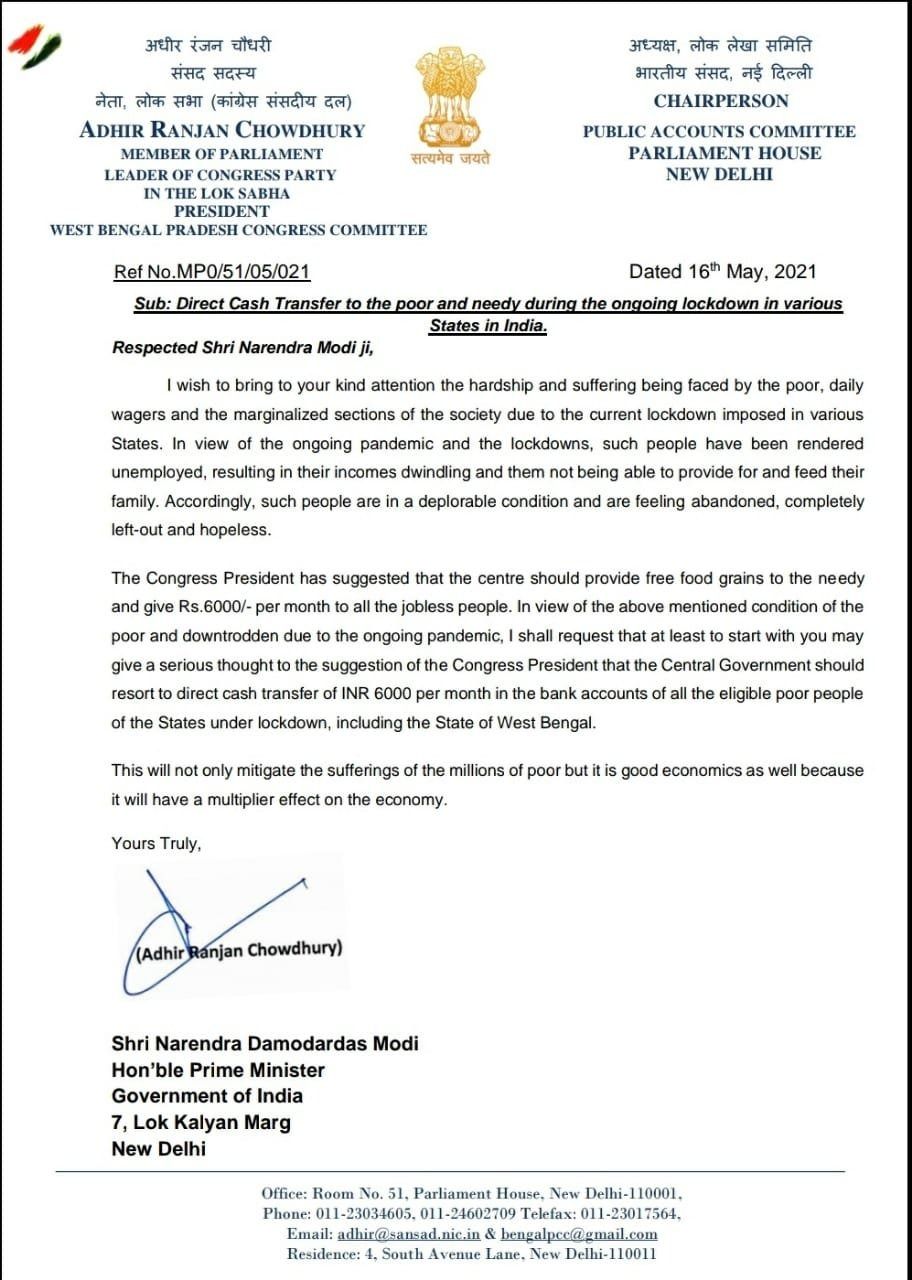 Leaders of 12 Opposition parties wrote a letter to PM Modi on Wednesday suggesting measures to curb the spread of COVID-19, including a bizarre recommendation to repeal the farm laws. A joint letter was penned by NCP's Sharad Pawar, Congress' Sonia Gandhi, JD(S) Devegowda, CPIM's Yechury, DMK's Stalin, JMM's Soren, CPI's Raja, SP's Akhilesh Yadav, Shiv Sena's Uddhav Thackeray, TMC's Mamata Banerjee, JKNC's Farooq Abdullah and RJD's Tejashwi Yadav to PM Modi, urging the Centre to implement the suggestions that were allegedly ignored previously. The letter took a jibe at PM Modi, claiming that it was 'not the practice of the govt' to pay heed to the Opposition's suggestions but urged him to respond to their recommendations.

In their letter to PM Modi, the leaders of the Opposition parties urged the Centre to allow COVID vaccines to be procured from all available sources - both globally and locally - and demanded a free and universal mass vaccination campaign throughout the country. Secondly, the Opposition asked the Centre to invoke compulsory licensing to expand domestic vaccine production and urged the Union Govt to spend Rs 35,000 cr allocated in the budget to procure vaccines. Targeting the Central Vista construction yet again, the Opposition leaders demanded the money allocated for the project to be used to procure vaccines and oxygen instead.

The Opposition leaders called for the money collected in unaccounted private trust fund including the PM-CARES fund to be released and used to procure oxygen, medical equipment and vaccine. The Opposition, which has frequently targeted the PM-CARES fund, made this suggestion just as PM Modi on Wednesday evening announced that 1.5 Lakh units of Oxycare Systems will be procured through PM-CARES fund at a cost of Rs 322.5 crore. Further, the leaders demanded Centre to provide Rs 6000 to all 'jobless' individuals in the country amid COVID.

Making the most bizarre suggestion to PM Modi, the Opposition parties urged the Centre to repeal the three farm laws in order to 'protect lakhs of annadatas' from being exposed to the pandemic so that 'they can continue to produce food to feed the Indian people'. Remaining oblivious to PM Modi's decision to approve the allocation of additional foodgrains for 2 months under Phase III of the Pradhan Mantri Garib Kalyan Anna Yojana (PM-GKAY), the Opposition leaders called for free distribution of foodgrains and claimed that over one crore tonnes of foodgrains were currently rotting in central godowns.

India's COVID-19 active cases count has decreased to 36,18,458 with a net decline of 55,344 cases being recorded in the active caseload in a span of 24 hours, while the daily positivity rate dropped to 16.98 per cent, the Union Health Ministry said on Sunday. The total active caseload now comprises 14.66 per cent of the country's total infections, it said. Ten — Karnataka, Maharashtra, Kerala, Rajasthan, Tamil Nadu, Andhra Pradesh, Uttar Pradesh, West Bengal, Gujarat, and Chhattisgarh — cumulatively account for 74.69 per cent of the country's total active cases, the ministry said.

“A declining trend in the positivity rate is also observed which has dropped to 16.98 per cent (May 16) from 24.47 per cent recorded on May 3,” it said. India’s cumulative recoveries have reached 2,07,95,335 with 3,62,437 patients recuperating in a span of 24 hours. It outnumbers the country’s daily COVID-19 cases for the fifth time in the last six days, the ministry said. Ten states account for 70.94 per cent of the new recoveries. The ministry noted that Karnataka, Maharashtra, Tamil Nadu, Kerala, Andhra Pradesh, West Bengal, Rajasthan, Uttar Pradesh, Odisha and Haryana reported 74.7 per cent of the 3,11,170 new cases registered in a span of 24 hours.