A scuffle erupted between Digvijaya Singh and police officers as the Congress party leaders attempted to make their way into the District Panchayat Office. 
In a shocking incident, former Madhya Pradesh Chief Minister Digvijaya Singh manhandled a 3-star police officer on Friday. The incident occurred when the Congress party reached the District Panchayat Office in Bhopal and alleged that the police and administration were working under the 'pressure of the BJP government' during the local body polls.

On Friday morning, Congress' Digvijaya Singh, MLA Arif Masood, and PC Sharma reached the office reached the spot to investigate reports of 'bogus voting'. A scuffle erupted between Singh and police officers as the party leaders attempted to make their way into the office over claims that the BJP had 'kidnapped people' and were taking them in government vehicles to cast fake votes. Ultimately, the police managed to push out the Congress leaders and roll the gate to prevent them from barging in.

Amid reports of the ruckus, BJP's Vishvas Sarang also reached the spot in a car. The Minister of Medical Education was seen exchanging heated words with Digvijaya Singh, with the latter being held back by officers. When a police officer tried to intervene, Digvijaya Singh allegedly grabbed the officer by the collar and shoved him aside. 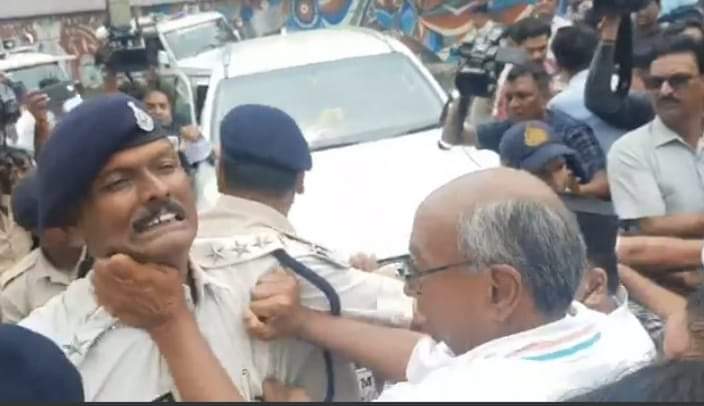 Speaking to reporters after the incident, Digvijaya Singh claimed that Congress was 'fighting to prevent the violation of election norms.' Calling the BJP 'bikau', he claimed that some people, who are not enrolled as voters, were also registering their votes in favour of the ruling saffron party in the polls.

“Anyone who is uneducated or not fit to cast their vote can get another family member to do it. But here nine votes were cast with fake medical certificates. They are bringing government cars full of people, who cast votes. It’s a violation of election rules,” claimed Digvijaya Singh.

READ | BJP should have made Scindia MP CM, Chouhan his deputy like in Maharashtra: Digvijaya Singh

#WATCH | A scuffle broke out between Congress MP Digvijaya Singh & BJP MLA Vishvas Sarang outside the District Panchayat office in Bhopal, Madhya Pradesh after Congress alleged that the police & administration were working under pressure of government during the local body polls pic.twitter.com/4ZcmmLoWBD

Speaking to Republic TV, the National Spokesperson of the BJP, Shehzad Poonawalla, alleged that the insult of security forces and public servants was a 'regular affair' of the Congress.

"The insult of security forces and public servants is a regular affair of the Congress. Remember how they (Renuka Chowdhury) assaulted a cop in Hyderabad? This shows the character. They also insulted the President of India," said Poonawalla.

Madhya Pradesh Chief Minister Shivraj Singh Chouhan also condemned the incident and questioned why the grand old party was jittery to the extent that a former CM had to assault a cop.

"This kind of shameful behavior, does not suit a former Chief Minister. He has been the CM for 10 years but he had to grab the collar of an officer, and yell at him? This is insolence. In a democracy, victories and losses are there. But what are they scared off that they are grabbing the collars of police officers and breaking gates? I condemn this," said Chouhan.