Congress Indulging In 'politics Of Lies' On Issue Of Farmers: Tomar In RS 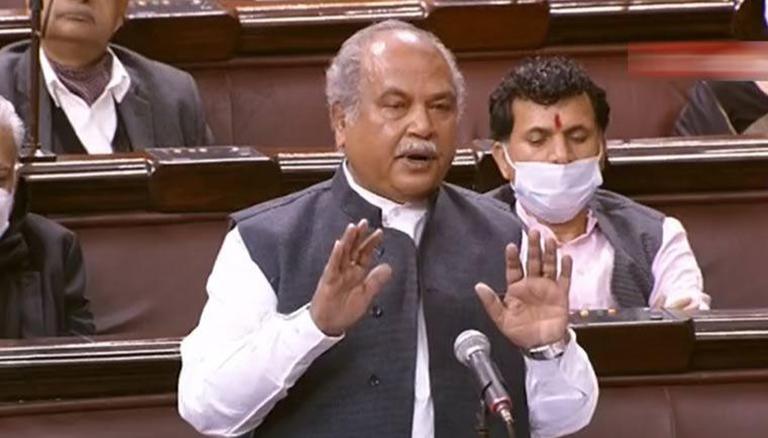 
Agriculture Minister Narendra Singh Tomar on Friday accused the Congress of indulging in politics of lies on the issue of farmers and adopting double standards on farm laws.

While replying to Congress leader Deepender Singh Hooda's question on the promised minimum support of price for farmers after their agitation last year, Tomar said in the Rajya Sabha that a committee has been formed to consider the proposal.

The Congress member claimed that the secretary, who made the now-repealed farm laws, is now working with a multinational company and questioned his intent in framing the laws.

Tomar said, "The Congress has always indulged in politics of lies... During the farmer's agitation, the Congress adopted double standards. The laws that Congress use to talk about while being in power, we created those laws".

Hooda demanded that certain remarks of Tomar be expunged following which deputy chairman Harivansh said the record will be examined.

Thousands of farmers, particularly from Punjab, Haryana and western Uttar Pradesh, had protested at the borders of the national capital for over a year, demanding the repeal of the three farm laws. Prime Minister Narendra Modi announced repealing the three laws in November last year.

The Congress' unit for farmers has accused the BJP-led central government of not cooperating with the farmers and reneging on its promises.

Tomar said MSP is same for the entire country and the process to determine is fixed.

He said the Commission for Agricultural Costs and Prices declares the MSP after consultation with states.

The minister said it is true that the cost of production varies from state to state because of difference in the environment.

He said that Swaminathan Commission submitted a recommendation in 2006 which also included suggestion of adding 50 per cent profit on the cost of production to declare MSP.

"Prime Minister Narendra Modi has accepted this recommendation. At present, MSP is declared after adding 50 per cent profit on the cost," Tomar said.