The disarray in the opposition ranks again come to the fore as Chhattisgarh CM Bhupesh Baghel came under fire for his veiled criticism of TMC on Friday. 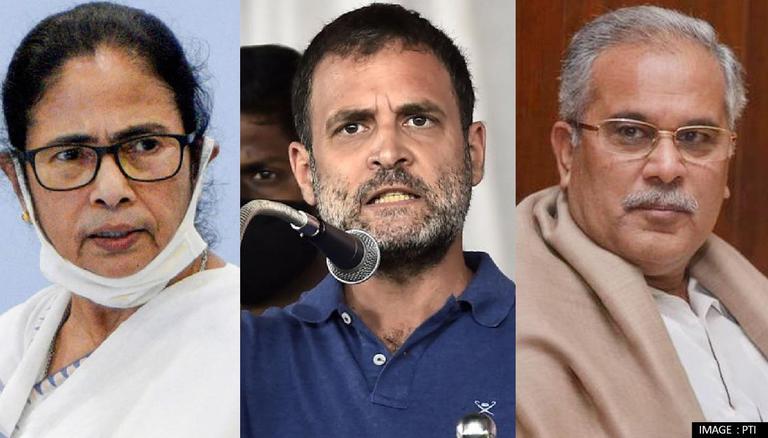 
The disarray in the opposition ranks again come to the fore as Chhattisgarh CM Bhupesh Baghel came under fire for his veiled criticism of TMC on Friday. Pouring cold water on the notion that the aggressive stance of Rahul Gandhi and Priyanka Gandhi Vadra on the Lakhimpur violence will boost Congress' fortunes, poll strategist Prashant Kishor had made it clear that there are no quick-fix solutions to the "deep-rooted problems" and "structural problems" of the party. This came as a surprise as speculation was rife that Kishor was in touch with the Congress top brass to join the party.

Baghel subsequently took an indirect swipe at Kishor by mocking TMC's ambition to increase its influence beyond West Bengal. Notably, the IPAC co-founder is perceived to have close ties with the TMC leadership and is credited for ensuring the Mamata Banerjee-led party's stupendous victory in the recently concluded WB Assembly polls. Lambasting TMC for "poaching" Congress leaders, the Chhattisgarh CM contended that concerted efforts are required for it to emerge as a "national alternative".

Hitting back at Baghel, TMC claimed that he was trying to appease the Congress high command. This was a reference to the ongoing power struggle in Chhattisgarh whereby state Health Minister TS Singh Deo wants to replace Baghel as the Chief Minister. Ridiculing the declining electoral prowess of Congress, the ruling party in West Bengal raked up Rahul Gandhi's embarrassing defeat in Amethi at the hands of Union Minister Smriti Irani in the 2019 Lok Sabha polls.

Rich words coming from a first-time CM. Punching above your weight doesn’t bring honour to you, Mr. @bhupeshbaghel. What a shoddy attempt to please the high command!

By the way, is @INCIndia going to try to erase the historical defeat at Amethi through yet another Twitter Trend? https://t.co/UiI1Zvcudl

Thereafter, she visited Delhi and met various opposition leaders including Congress president Sonia Gandhi. In an attempt to expand its base across the country, TMC has increased its political activities in Tripura and Goa aimed at emerging as an alternative to Congress. However, the party has riled Congress in the process by inducting many of its leaders such as Sushmita Dev, Abhijit Mukherjee and former Goa CM Luizinho Faleiro. Incensed by the growing political capital of the Mamata Banerjee-led party, Congress recently accused TMC of indirectly helping BJP by dividing the secular votes.