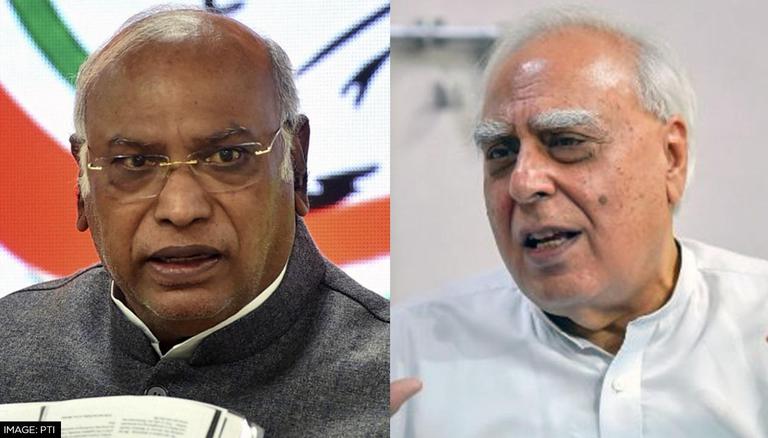 
On Tuesday, Leader of Opposition in Rajya Sabha Mallikarjun Kharge expressed his disappointment with Kapil Sibal publicly airing grievances about the Congress leadership. In a recent interview, the G23 leader had called upon the Gandhis to step aside from their leadership roles in the aftermath of Congress' humiliating defeat in Uttar Pradesh, Manipur, Uttarakhand, Goa and Punjab. Speaking to the media, Kharge exhorted Sibal to contest the organization elections so that he can ensure that a candidate of his choice becomes the party president. Moreover, he urged his RS colleague to not weaken the party.

Mallikarjun Kharge remarked, "He said that it is his personal opinion and voiced it. Our party is a democratic party. Any member can put forth his personal opinion. But it is sad that he directly gave an interview to the media. I didn't like this. The decisions of the party were collectively taken by the Congress Working Committee. If you reject them, you are not giving respect to anyone."

"It is my opinion that if someone wants to say something, he can wait 3-4 months. Elections are coming. He should take part in the elections. Then, he can bring a person of his choice (as president). But I didn't like his talking only about the Gandhi family now. I will say this to him- we have to make the party stronger together and not make it weak by giving such statements," the senior Congress leader added.

Business as usual within Congress

In the recent round of Assembly polls, Congress lost its government in Punjab by winning only 18 out of 117 seats. On the other hand, it also failed to take advantage of the anti-incumbency in Goa, Uttarakhand and Manipur as BJP romped to a comfortable victory in these states. Thus, Congress is now in power only in Rajasthan, Chhattisgarh, Jharkhand and Maharashtra. With the G23 leaders convening an urgent meeting, there was anticipation that Congress might advance its organizational elections and take some drastic steps to stem its downfall.

However, the CWC meet on March 13 turned out to be a damp squib as the party reaffirmed its faith in the leadership of interim president Sonia Gandhi and asked her to lead from the front. Expressing "serious concern" on the poll results, the CWC said, "While humbly accepting the electoral verdict of the latest round of Assembly elections, the Congress party assures its workers and the people of India that it will continue to remain a vigilant and vibrant opposition. The Congress party will be fully prepared to face the electoral challenges in the election going states in 2022 & 2023 as well as in the Lok Sabha elections 2024".