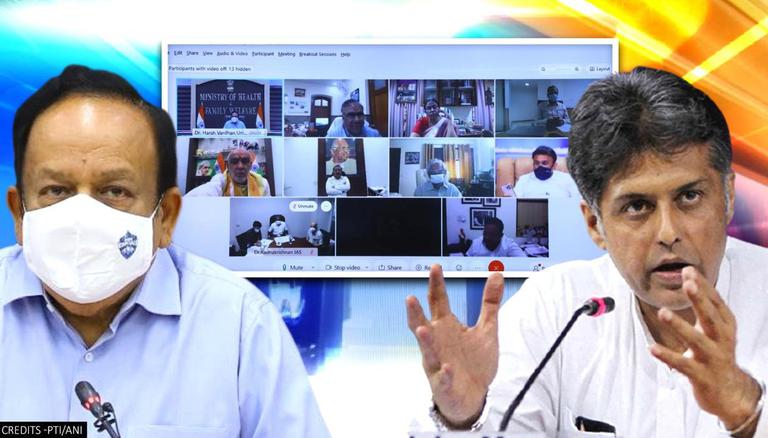 
Slamming Union Health Minister Harsh Vardhan's statement on state's demand for vaccines, Congress MP Manish Tewari on Friday, summed it up as Centre's mantra to 'stay positive'. Listing the states' demand such as oxygen, ventilators, vaccines, Tewari dubbed Centre's response as 'stay positive' and that the 'state's dare not test positive'. This was in response to Dr Vardhan claiming that the ''whole-of-government'' approach was being harmed by vaccine demand by states. 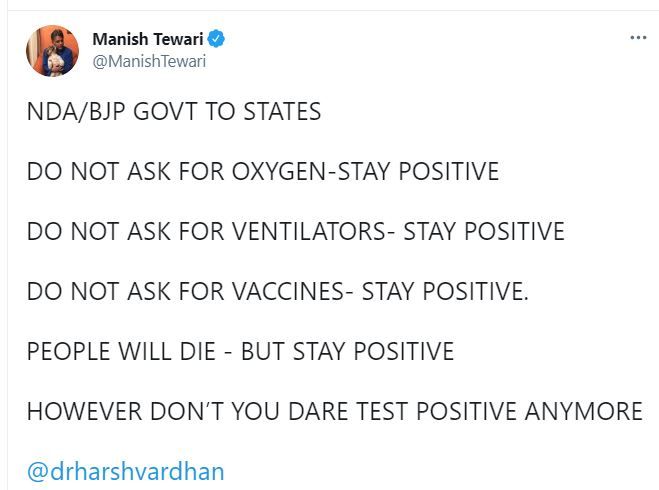 On Thursday, Union Health Minister Harsh Vardhan held a virtual meeting with health ministers and principal secretaries or additional chief secretaries of Maharashtra, Karnataka, Kerala, Tamil Nadu, Rajasthan and Delhi. In that meeting, he stated, "This demand for more vaccines from state leadership arouses narrow political passion among the masses which harms the ''whole-of-government'' approach to tackle the pandemic," read the PIB statement. In response, the state health ministers requested for the formation of a common policy of procurement of vaccines from foreign manufacturers.

Vardhan said that under the Liberalised Pricing and  Accelerated National COVID-19 Vaccination Strategy, along with free vaccination under government channel, states can use the non-government channel to have a holistic vaccination coverage of their population. "88 per cent of the fatalities were in the age group of 45+ which prompted us to open the vaccination to that group in a gradual manner. However, states depending on their own situation can opt for vaccination of other age groups through direct procurement now. The lack of availability of a second dose has been taken into consideration when guidelines for reserving 70 per cent of vaccines were framed," he was quoted as saying by PIB.

Vardhan advised the states to have a long-term planning to tackle COVID-19. Many states have been fighting the pandemic for more than a year which has gradually exhausted the medical workforce and the public health machinery, the statement said. The minister suggested that states take a pro-active role in ensuring the rotation of workforce and their regular counselling regarding their duty. Health ministers of Maharashtra (Rajesh Tope), Karnataka (K Sudhakar), Kerala (K Shailaja), Tamil Nadu (M Subramanian), Rajasthan (Raghu Sharma) and Delhi (Satyendra Jain) virtually attended the meeting, the statement said.