Congress MP Ravneet Singh Bittu on Monday appeared to justify and support the violence & arson that rocked the country during the Agnipath Protests. 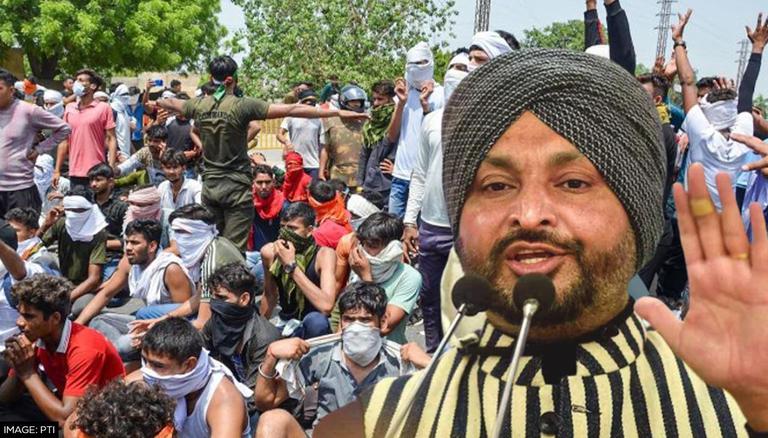 
Congress MP Ravneet Singh Bittu on Monday openly justified and supported the violence & arson that rocked the country during the Agnipath protests. In an exclusive conversation with Republic TV, Bittu stated that the youth of the country is very angry as they do not have any other options and there is no use for peaceful protests. Accusing the BJP-led central government of dictatorship, the Congress leader claimed that neither do they allow MPs to speak in the houses of Parliament nor do they let citizens protests. He stated that just like Farm laws, Prime Minister Narendra Modi will have to roll back Agnipath Scheme as well.

On being asked about whether the burning of trains and damaging public property amid protests was justified, Bittu said, "No one can understand the anger and frustration felt by youth who are indulging in violence. Youth is angry today they will protest. What else youth will do. What resort they have left to take. BJP tries to gag MPs and act dictatorially what option do we have," he added.

"The things PM Modi has been saying for Agnipath Scheme are the same things he said for the farmers' bill but he had to take it back. We have come here to submit a memorandum to President Ram Nath Kovind, first for the rollback of the Agnipath scheme and second memorandum on the illegal detention of Congress MPs by the Delhi Police," said Ravneet Singh Bittu.

Prime Minister Narendra Modi on Monday cleared the air around the initiative, asserting that reforms may look unpopular at first, however, it helps the country in the long run. PM's remarks came while addressing a public event in Karnataka's Bengaluru.

"Many reforms might look unpopular at first but the reforms will benefit the nation in long run. Reforms take us towards new targets and resolutions," PM Modi said at a public gathering in Bengaluru.

Agnipath is a pan-India short-term service youth recruitment scheme for the Armed Forces launched to reduce the average age of the Indian Army. Those inducted into the service will be called 'Agniveers' and will be employed for four years where rigorous military training will be imparted to them. The age group for eligibility under the scheme is 17.5 to 21 years (23 years, as a one-off exception for the year 2022). The starting annual package will be Rs 4.76 lakh, which can be increased to 6.92 lakh by the end of the service.

Soldiers aspiring to be entrepreneurs will receive a financial package and bank loan scheme after serving in the army for four years. Those desiring to pursue higher education will be given a certificate equivalent to the Class 12 certificate and a bridging course and the ones who wish to obtain jobs will be given priority in Central Armed Police Forces (CAPFs) and the state police. Several avenues will also be opened for them in other sectors.