Kumari Selja went into damage control after revealing that Mallikarjun Kharge was selected as Congress Presidential candidate by Gandhis in a deleted tweet. 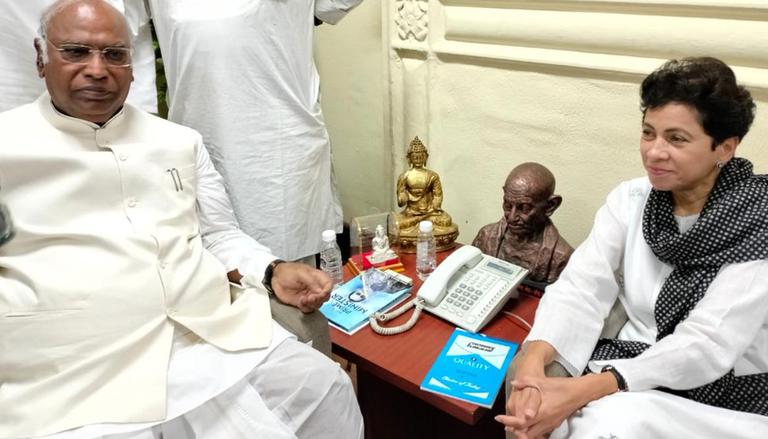 
Senior Congress leader and former Haryana Pradesh Congress Committee chief Kumari Selja took a massive U-turn on September 30, after revealing that Congress Presidential nominee Mallikarjun Kharge is a choice of the Gandhis. In a now-deleted tweet, Selja had thanked both Rahul and Sonia Gandhi for electing Kharge as a candidate for the top post and appealed for his unanimous election.

"I thank our leaders Sonia Ji and Rahul Ji for having chosen Kharge Ji to contest as Congress President. He reflects core values and beliefs of our party", the deleted tweet read. "To appreciate his outstanding contributions in Public Service I appeal that he should be unanimously elected". 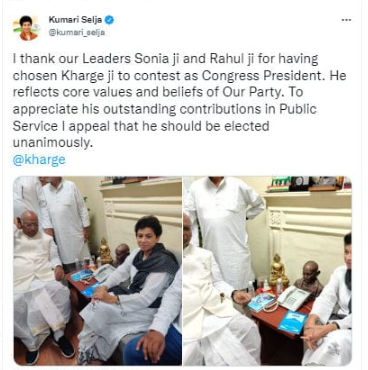 About an hour after sharing the post above, the tweet was deleted and replaced with another captioned, "I am happy to propose the name of Kharge ji as Congress President. He reflects core values and beliefs of Our Party. To appreciate his outstanding contributions in Public Service I appeal that he should be elected unanimously (sic)". 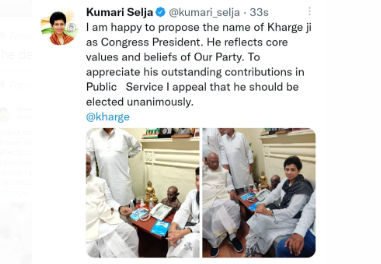 Speculations are being made that Kharge, being a personal choice of the Gandhis, might have an edge over other Presidential candidates-- Shashi Tharoor and Jharkhand Congress leader KN Tripathi. This might the reason why 30 Congress leaders including big names such as Salman Khurshid, AK Antony, Ashok Gehlot, Mukul Wasnik, Ajay Maken, Abhishek Manu Singhvi, Ambika Soni, Digvijaya Singh are vouching for Kharge. Rajasthan CM Ashok Gehlot, however, reiterated the Gandhi family's vow to stay neutral and not influence the election of the new President.

Total 30 Congress leaders have proposed Mallikarjun Kharge's name for the election of the president of the Indian National Congress pic.twitter.com/1M65uYhjWc

Notably, Gehlot was the most favoured candidate for the President's post before he announced this week of pulling out of the contest citing the rebellion within Congress. The biggest twist, however, surfaced today when Rajya Sabha MP Digvijaya Singh also withdrew his name from consideration making way for Kharge.

The elections are scheduled to take place on October 17 and the results will be declared on October 19. Notably, no candidate from the Gandhi family will be contesting the polls this time.