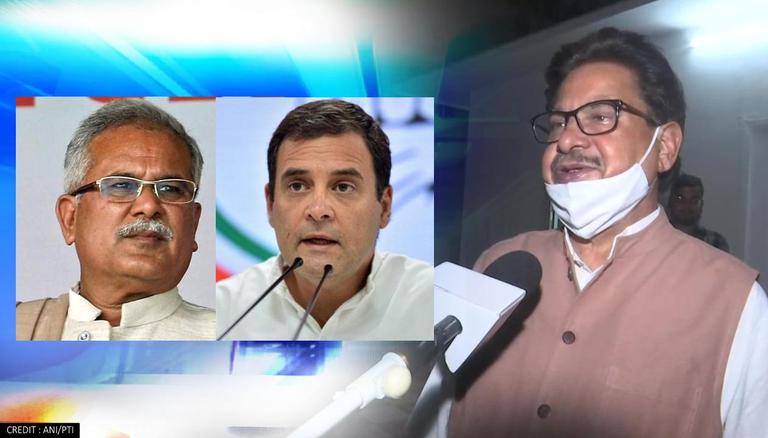 
Amid infighting in the Chhattisgarh Congress, the state's party in-charge PL Punia on Friday said that the media reports of tension between Chief Minister Bhupesh Baghel and senior Minister TS Singh Deo were absolutely 'false'. While stating that Baghel and Dep share good relations, PL Punia said that the two meet each other normally. Informing that both of them respect each other a lot, he said that reports in the media are 'baseless'.

PL Punia: 'The two meet each other normally'

Asserting that Bhupesh Baghel had requested Rahul Gandhi to come to Chhattisgarh and see it for himself, Punia said that accepting CM's invitation, Rahul Gandhi had agreed to visit the state. Speaking further he said that as far as the Chhattisgarh MLAs are concerned, they met KC Venugopal and him, he said that they wanted to display a show of strength, they would have gone to Rahul Gandhi. They did nothing of that sort, they had not come here for that. It has nothing to do with CM's visit, Punia added.

Earlier during the day, Bhupesh Baghel met former party President Rahul Gandhi for 'political as well as administrative' discussions. Speaking to the reporters after the meeting, Bhupesh Baghel asserted that he invited Rahul Gandhi to Chattisgarh and that the latter had agreed to pay a visit next week. Rahul Gandhi's visit is going to hold relevance at a time when there is pressure on the Congress by TS Deo to make him the Chief Minister in place of Bhupesh Baghel following the '2.5-year-formula', which the Congress has denied all this time.

It is pertinent to mention here that when the Congress Party won the Assembly elections in Chhattisgarh, there were four contenders for the post of Chief Minister- Bhupesh Baghel, TS Singh Deo, Tamradhwaj Sahu, and Charandas Mahant. All four had been called in for a discussion by the then Congress president Rahul Gandhi and  TS Deo and Bhupesh Baghel were the two names narrowed down on. There have been speculations since then that formula to divide the chief ministerial tenure between Baghel and Singh Deo was made to keep everyone happy.

Now that the Bhupesh Baghel has crossed the two-and-a-half-year mark, TS Singh Deo, as per sources, has already conveyed to the party's high command that he could not wait any more than two months for the chief ministership to be transferred to him. This is reportedly the cause behind the tussle between Bhupesh Baghel and TS Deo.