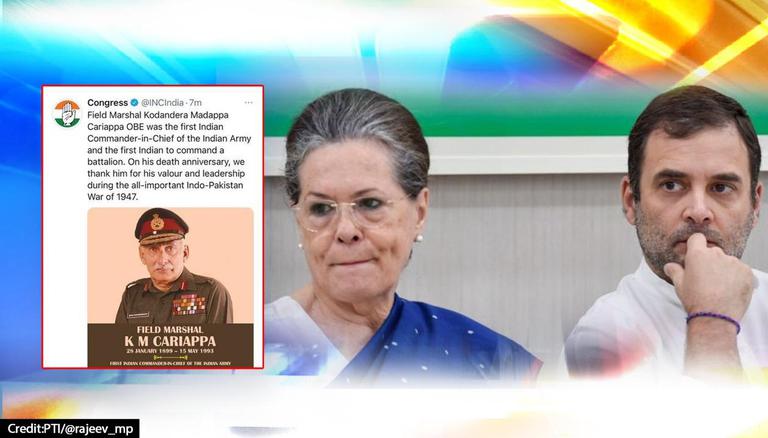 
In a major goof-up, the official Twitter handle of the Congress party on Saturday tweeted Field Marshal Sam Manekshaw's photo while honoring Field Marshal Kodandera Madappa Cariappa. Soon after receiving several backlashes, the grand old party removed the tweet and put out a fresh one with the correct image.

BJP MP Rajeev Chandrashekhar being one of those who noticed the blunder took no time to take a screenshot and tweeted:

Meanwhile tdy at Rahuls Cong .. this 👇🏻

While paying tribute to Field Marshal Cariappa, Congress had tweeted, "Field Marshal Kodandera Madappa Cariappa OBE was the first Indian Commander-in-Chief of the Indian Army and the first Indian to command a battalion. On his death anniversary, we thank him for his valour and leadership during the all-important Indo-Pakistan War of 1947."

READ | Congress slams Union Min Gowda's 'should we hang ourselves if not enough vaccines?' remark

Not knowing national icons is one thing, doesn't the person handling @INCIndia page even know how to read English? Field Marshall Sam Manekshaw's name is written crystal clear on the name badge. How ridiculous. pic.twitter.com/IrcAK5j6ps

The grand old party doesn’t even know who our National Heroes are & you expect them to have taught us correct history ?

Hey @INCIndia, have you lost your mind ?

You guys ruled this nation for 60 years & you don’t even know who the two legendary field marshals of this nation were ?

Years of staying at the feet of the Fake Gandhis has made @INCIndia so blind that it cannot differentiate between Field Marshal K M Cariappa and Field Marshal Sam Manekshaw.

This is how CONgress respects our National Heroes. pic.twitter.com/lVfKaQACxd