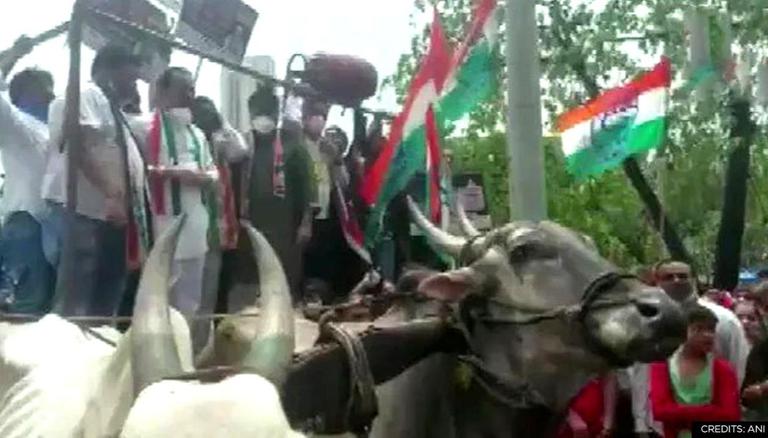 
A bullock cart protest organized by Maharashtra Congress leaders against rising fuel prices came to an embarrassing end on Thursday after the cart collapsed in Mumbai's Antop Hill area.

In a viral video, several Congress workers and leaders were seen protesting atop a bullock cart with LPG cylinders, when the cart came down crashing due to overloading. Mumbai Congress chief Bhai Jagtap and other supporters too collapsed amidst all the sloganeering against the fuel price hike.

#WATCH | Maharashtra: A bullock cart, on which Congress workers and leaders were protesting in Mumbai today, collapses. They were protesting against the fuel price hike. pic.twitter.com/INqHWpNi7C

Bhai Jagtap had earlier announced that Congress will hold agitation against fuel price hikes across Mumbai from July 7 to July 17. This includes a signature campaign across 100 petrol pumps in Mumbai. He said there will be agitations in 22-23 wards of the city every day.

A similar protest involving cattle and domestic animals was seen in Aurangabad, where Congress leaders rode camels, horses, and bullock carts to express their displeasure over the fuel price hike.

The prices of petrol of diesel have been repeatedly hiked over the past few months and have crossed the Rs100-mark in a number of cities all over the country. As of Friday, the price of petrol in Mumbai is Rs 106.25 per litre and that of diesel is Rs 97.18 per litre. The fuel price in Mumbai has reached an all-time high and is the highest in the country.

In the meeting chaired by Sonia Gandhi on Frida, the party president Sonia Gandhi reportedly said the rising prices are causing an intolerable burden on people and agitations should be organized to highlight how it is hurting farmers and millions of families. Apart from fuel, the prices of many other essential commodities like pulses and edible oils too have spiked amid the pandemic causing widespread distress, she noted.

Earlier, the Centre had drafted a reply to redress enraged peoples' concerns over the price hike, in which it was stated, "Considering the fiscal position of the country, these taxes are imposed for meeting budgetary requirements of GOI and state government levels so as to generate resources for infrastructure and other developmental items. "