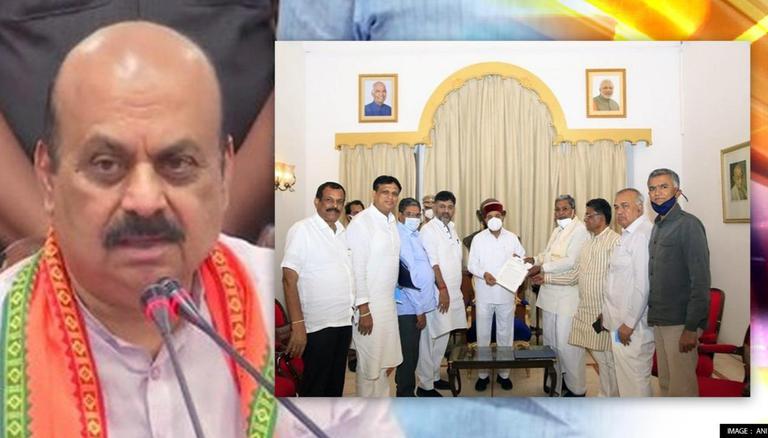 
A delegation led by Opposition Congress leaders Siddaramaiah and DK Shivakumar met Karnataka Governor Thaawarchand Gehlot on Thursday and submitted a memorandum seeking imposition of President's Rule over the 'failure of constitutional machinery' in the state. They were referring to the allegations by the Karnataka State Contractors' Association that 40% of almost every project cost is paid to government officers and elected representatives as bribes, to get their dues.

The delegation also sought a judicial investigation by a sitting Judge of the Supreme Court on the allegations made out by the contractors’ body in their memorandum dated July 6, 2021, to Prime Minister Narendra Modi.

"The people of Karnataka are shocked to know from the Karnataka State Contractors' Association that there is rampant corruption in various departments such as Public works, minor and major irrigation, Panchayath raj, Health and Medical education and BBMP etc., and for every work, the contractors have to pay more than 40% Commission to some of the concerned Ministers, Legislators, Lok sabha members and other officials," said the memorandum by the Opposition.

'Both Centre and state govts compromised by corruption'

The Karnataka Opposition leaders questioned the silence of the Prime Minister on the 'rampant corruption in the state administration, amounting to several thousand crores,' even after a lapse of 4 months since the memorandum was submitted by the Contractors Association. "So far no action has been initiated on this issue. This shows both the Governments have compromised with the corruption," they said.

The Government of Karnataka, the State Police, CBI, ED, Income Tax Department, and other concerned authorities have also failed to take cognizance and necessary legal action on the above said rampant corruption and money laundering issue, the memorandum added.

"The percentage of commission/kickbacks is a bribe, money laundering and amounts to an offence as per the provisions of the Indian Penal Code, the prevention of Corruption Act, the prevention of money laundering Act and other provisions of law. The non-action by the PM and other concerned authorities really causes a lot of panics, anxiety in the minds of law-abiding citizens of our country more particularly citizens of Karnataka," it stated.

The Karnataka State Contractors Association recently shot off a letter to the Prime Minister alleging that they are made to cough up around 25-30% of the tender amount to elected representatives and others before the project starts. The letter, the association stated, was to highlight the “miserable plight” of working contractors in the state and sought remedial measures for the same.

The contractors’ body alleged that the concerned ministers insist on payment of 5% of the tender amount before approval while a few elected representatives demand 3% before the work begins. In district and taluks, there are demands to the extent of 5% on buildings and 10% on road works, it added.

READ | In Karnataka, cash flows out of drainage pipe at raid spot as ACB searches 60 locations

"The local registered contractors of our state have (to) pay to the extent of 25% to 30% (for elected representatives & others) of the tender amount before starting the works. Such being the position how (will) the contractor undertakes good work,” the letter stated.

After the allegation surfaced, chief minister Basavaraj Bommai on Thursday said all tenders will be scrutinized, even though the contractors' letter does not provide any specifics.