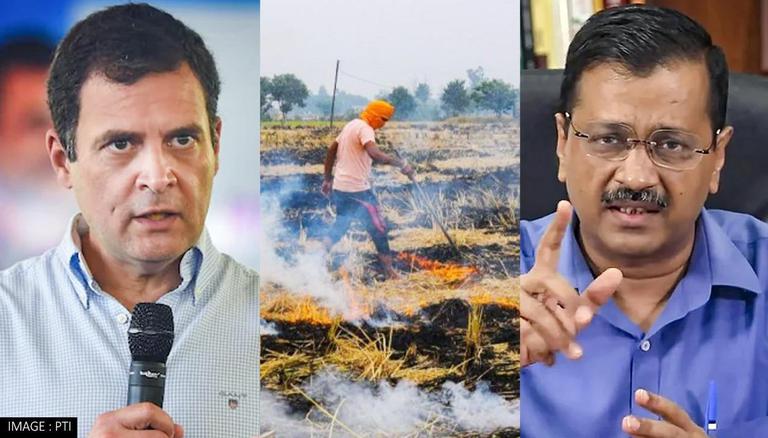 
Hailing the Supreme Court's observation on stubble burning and air pollution, Congress on Monday, slammed AAP for needlessly wasting money on PR and popularity stunts instead of tackling the real issues. Stating that the Kejriwal govt was diverting attention from real issues, Congress urged Delhi to hold its govt accountable. The Supreme Court has lambasted the Delhi govt for inaction to curb pollution in the national capital, accusing it of pushing off the blame on farmers and not taking adequate measures.

The unending PR & popularity stunts by the Kejriwal govt is just to divert your attention from the real issues.

You are using toxic water,
You are breathing hazardous air,
You are living in an extremely polluted environment.

Stating that the Delhi govt was making 'lame excuses' on curbing air pollution, the Supreme Court bench headed by CJI NV Ramana on Monday, ordered work from home throughout the NCR. SC also urged states to persuade the farmers to stop stubble burning for a few days. Ordering the Centre and state govt to hold an executive committee meeting by Tuesday evening, the bench adjourned the matter to Wednesday. The SC bench of CJI NV Ramanna and Justices DY Chandrachud and Surya Kant are hearing pleas on Delhi's air pollution as its air quality slipped into the 'very poor' category, recorded at 342.

SC concluded that the major culprits of pollution are - Construction, Industries, vehicular traffic, while stubble burning was a lesser cause. Suggesting three steps to curb pollution, CJI Ramana said, "Three more drastic steps which haven’t been implemented are - Odd even scheme for vehicles, truck entry ban to delhi and severest would be Lockdown". With Centre asserting that stubble burning amounted to 10% of the pollution, SC noted that the Delhi govt's affidavit was only accusing farmers for pollution. The bench asked, "Are you trying to put blame on municipal corporations? Are you trying to pass the buck?".

The Centre in its affidavit refused to shut down the Badarpur plant, suggesting to increase natural gas fuel intake instead. It also stated that, if the AQI reduces beyond 500, trucks, traffic, schools etc, would be shut down in Delhi. Centre also suggested dust control measures at construction sites, reducing operation of coal-based power plants, closure of all hot mix plant, shutting all brick kilns, stopping use of diesel generating sets and fines on garbage burning. Delhi, in its affidavit, blamed stubble burning as the main reason and said it was ready to impose full lockdown amid worsening air quality. The air quality index of Ghaziabad, Greater Noida, Gurgaon and Noida stood at 328, 340, 326 and 328 respectively at 9.05 AM.