In a fresh attack on the Congress, the BJP has claimed that Congress party is sponsoring Facebook ads in Pakistan to remove PM Modi. 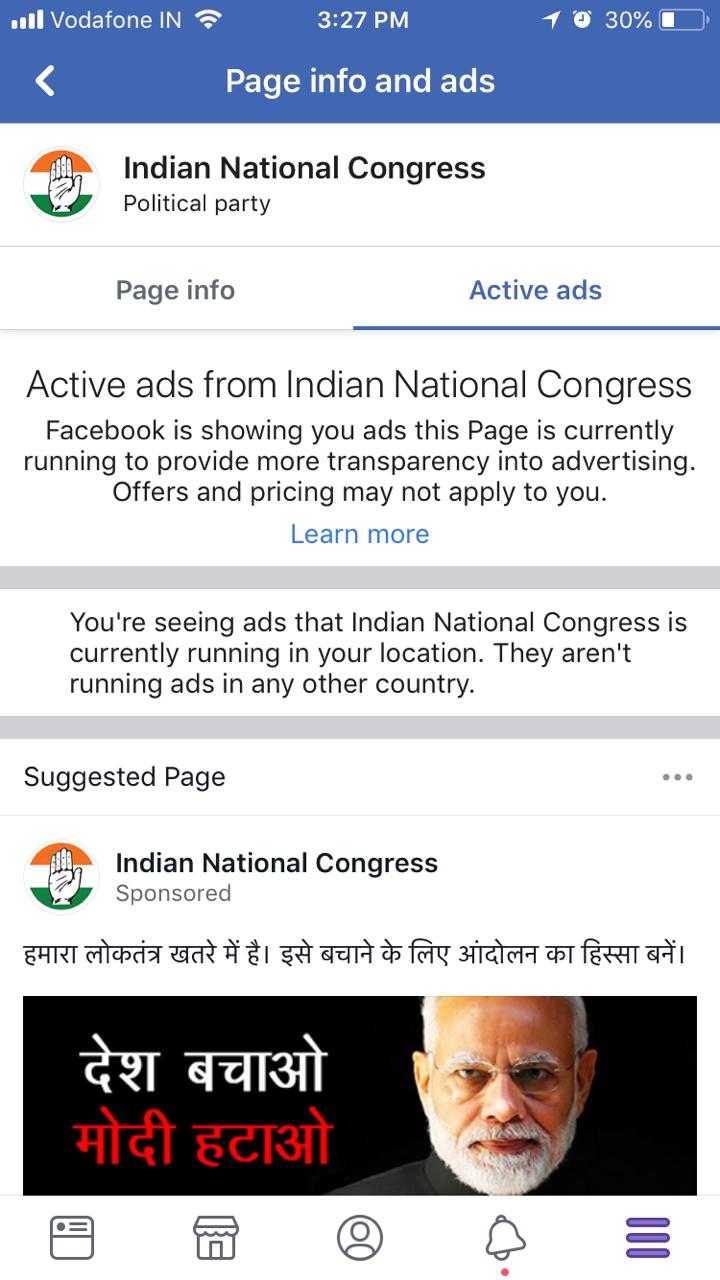 As an explanation for why the drop-down to select country doesn't appear, the BJP has claimed that the Congress has stopped the advertisement and that the screenshots posted are today's. (Republic TV has verified that if a page advertises in another country apart from India, the drop-down does appear.)

In a fresh attack on the Congress, the BJP has claimed that Congress party is sponsoring Facebook ads in Pakistan to remove PM Modi. In-charge of BJP's national Information & Technology cell, Amit Malviya, has tweeted an image as well as a video which shows the official page of Congress allegedly flashing a 'Desh Bachao, Modi hatao' campaign in Pakistan.

In his video, he has demonstrated step by step  'proof' for his claims. In his video, 'proof' plays out as follows:

Video recording of Congress’s official page where it can be seen that they are running ‘मोदी हटाओ’ campaign in Pakistan. pic.twitter.com/yny5P2VVMN

"It's absolutely clear that the Congress is now seeking to remove Prime Minister Modi from Office and is soliciting support from Pakistan. As we have put out in the video and an image of the ads that are running at the official page of Congress party are actually sponsored in Pakistan. Given the new algorithm by Facebook where anyone can see where the ads are being targeted, you could argue that all pages are public. But if a political party projects such ads in Pakistan then what is the message that you are giving?"

"You have Mani Shankar that goes to Pakistan and says "Inhe Hataeye Hume Lehaye". Then you have Navjot Singh Sidhu going and hugging Pakistan Army chief who is responsible for causing injuries to our brave hearts", he added.

This is not the first time that Congress has indulged in undermining Indian elected Prime Minister in Pakistan for its own petty political gains. Earlier, senior Congress leader Mani Shankar Aiyar had also gone to Pakistan and asserted exactly the same thing that the Facebook ad now allegedly says.

Congress rhetoric at home and Pakistan’s rhetoric at the UNGA also had eerie similarities. Earlier in September, Pakistan government had openly come out to campaign for Congress President Rahul Gandhi as the next Prime Minister of India. Many Pakistani leaders were miffed with Prime Minister Narendra Modi whose government called of the talks between the two countries at UNGA. Hence, they had come out in support of the Congress President.

One can also recall how Congress leader Navjot Singh Sidhu had gone to Pakistan for Imran Khan’s swearing-in ceremony and hugged the Pakistan army chief undermining the thousands of soldiers.