In an astonishing turn of events, Congress general secretary Randeep Surjewala accused PM Modi of "insulting" BS Yediyurappa by forcing him to resign as the CM. 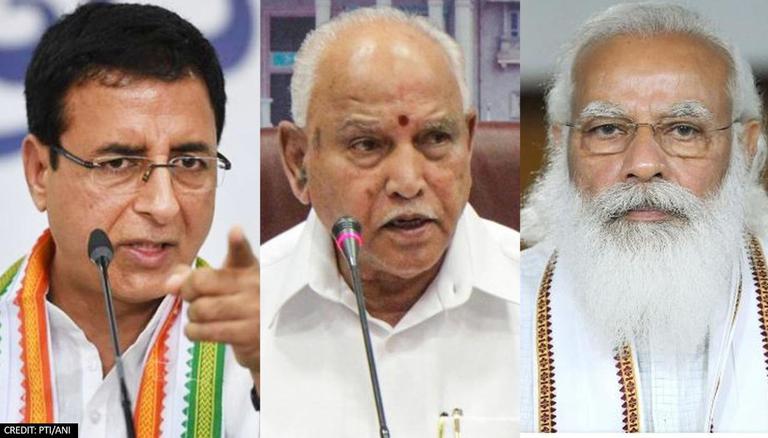 
In an astonishing turn of events on Monday, Congress general secretary Randeep Surjewala accused PM Modi of "insulting" BS Yediyurappa by forcing him to resign as the CM. According to him, leaders such as LK Advani, Murli Manohar Joshi, Keshubhai Patel, Shanta Kumar, Yashwant Sinha, Sumitra Mahajan, Uma Bharti, CP Thakur, Haren Pandya and Kalyan Singh had also been shunted into the "forced retirement club". Moreover, Surjewala expressed concern for Harsh Vardhan and Ravi Shankar Prasad who were recently dropped from the Union Cabinet and ex-Deputy CM Sushil Kumar Modi.

Taking to Twitter, Randeep Surjewala opined, "Malady is with BJP’s corrupt government and appalling maladministration in Karnataka, for it is an illegitimate government born out of “defection and corruption”. Will merely changing the face change the diabolical character of BJP government synonymous with malgovernance and decay? The stark reality is that Modiji habitually insults and compulsorily throws senior BJP Leaders in dustbin of history."

Additionally, he claimed that the saffron party decides the Chief Ministers in an autocratic manner as against accepting the will of legislators. Earlier in the day, Yediyurappa clarified that he resigned on his own volition and not as per any instruction from the BJP high command as perceived by the people. Meanwhile, the Karnataka unit of Congress dared BJP to recommend the dissolution of the state Assembly and go for fresh polls.

Malady is with BJP’s corrupt Govt & appalling maladministration in #Karnataka , for it is an illegitimate Govt born out of “defection & corruption”.

4/4
The ignominy, torment & insult being heaped upon Sh. B.S.Yediyurappa by Modi ji, dictating him to tender his resignation, makes him PM’s latest victim and member of the ‘forced retirement club’.

We now know that Delhi’s autocracy decides CM’s and not the will of BJP’s MLA’s. https://t.co/iPvKJ4E1hV

Yediyurappa puts in his papers

Yediyurappa announced his resignation while addressing an official event marking the completion of two years of his government. Speculations about his ouster started doing the rounds after he visited the national capital recently where he met PM Modi, Union Home Minister Amit Shah, Defence Minister Rajnath Singh, and BJP president JP Nadda. Reminiscing his journey, the BJP leader expressed hope that the Narendra Modi-Amit Shah duo will get a 3rd successive term at the Centre and take the country forward.

While Karnataka Governor Thaawarchand Gehlot accepted Yediyurappa's resignation, he has been asked to continue as the CM until alternative arrangements are made. Addressing the media outside the Raj Bhawan, Yediyurappa thanked the BJP top brass for giving him the opportunity to serve as the CM even after completing 75 years of age. Furthermore, he vowed to continue working for the welfare of the people of Karnataka.

Outgoing Karnataka CM BS Yediyurappa remarked, "Nobody pressurised me to resign. I did it on my own so that someone else can take over as CM after the completion of 2 years of govt. I'll work to bring BJP back in power in the next election. I've not given the name of anyone who should succeed me."