The first T20I of the 3-match series between India and Sri Lanka at Barsapara Cricket Stadium in Guwahati on Sunday was called off due to a wet outfield. Even though the ground staff tried their best to dry the wet patches which had formed about a couple of meters from the stumps. Steam iron, hair-dryer, vacuum dryer and Super Sopper were used but to no effect.

According to some reports, rainwater seeped through leaking covers that were used to cover the pitch. Now, the Madhya Pradesh Congress on Tuesday has targeted BCCI secretary Jay Shah over the matter.

Taking to Twitter, the official handle of the MP Congress wrote, "Before the Guwahati cricket match, a cover with holes was used to cover the pitch because of which the pitch became wet and the match was abandoned. Then to dry the pitch, hair-dryer, vacuum dryer and iron was used and a scene was created. Looks like Amit Shah's son has taken over." 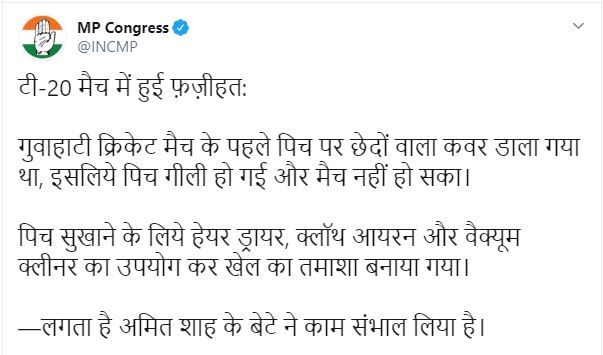 Earlier, India captain Virat Kohli won the toss and had no hesitation in bowling first in Team India's first international match of 2020. Kohli had opted to rest Ravindra Jadeja and Yuzvendra Chahal and opted to go for Kuldeep Yadav and the all-round skills of Washington Sundar. Sri Lanka captain Lasith Malinga, on the other hand, revealed that veteran Angelo Matthews would miss the match while young sensation Bhanuka Rajapaksa was going to play his maiden international game in India.

With dew expected to play a big role later on in the game, Kohli was fortunate to win the toss but chances of any play happening went up in smoke as heavy rain lashed the stadium soon after the toss.

Even after the rain stopped, and the umpires came out for a routine inspection, Kohli was seen unhappy at seeing the wet patches which became the major talking point for the rest of the evening. When Kohli, Shikhar Dhawan, and Rishabh Pant walked out to do some drills, the crowd started singing 'Maa Tujhe Salaam' in unison with the flashes of their smartphones turned on in full to create a magical scene. The teams will play the 2nd T20I in Indore on Tuesday.