Reacting to Rahul Gandhi's 'India is not in a good place', Fadnavis said there is complete peace in the country & blamed Congress for appeasement politics. 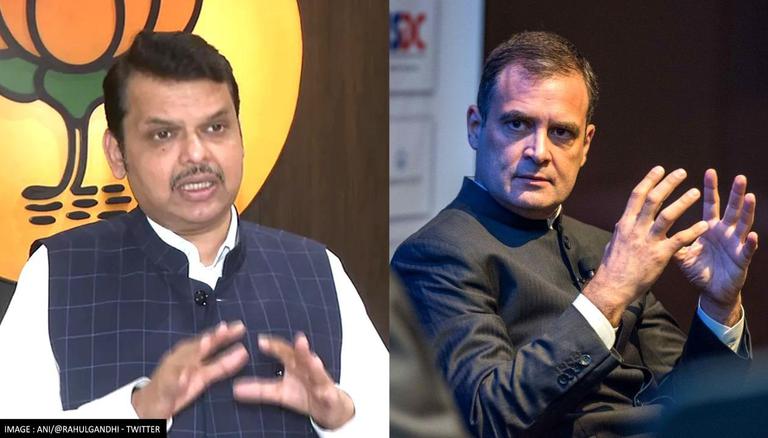 
Former Maharashtra Chief Minister & Bharatiya Janata Party leader Devendra Fadnavis on Saturday slammed Congress leader Rahul Gandhi for making anti-India remarks in London. Responding to Rahul's 'India is not in a good place', Fadnavis stated that there is a sense of complete peace in the country for many years now. He blamed Congress for bringing appeasement politics that tore India's society into two pieces.

The Congress Member of Parliament also said that "Prime Minister Narendra Modi doesn't listen". Fadnavis hit out at the statement, by asserting that people are attracted to PM Modi's leadership and claimed some people are just jealous. Earlier, BJP stressed that he doesn't know 'ABCD' of foreign policies" and it's Rahul Gandhi's habit, along with his family, to make anti-India remarks in the process of targetting PM Modi.

"There is complete peace in India, for the last many years, the policy of appeasement was brought by the Congress party in India, that is why they tore the society into two pieces. Now by removing those two parts we are all sons of the same Mother India. The people of the country are getting attracted to Modi Ji because of the way Modi Ji is giving leadership to the country, some people are getting jealous about it," said Devendra Fadnavis.

Addressing an ‘Ideas for India’ conference at Cambridge in London, Rahul Gandhi said that India is not in a 'good place' as he attacked the BJP-led government at the Centre and stressed that the opposition needs to bring "people, communities, states, and religions" together.

"India is not in a good place. BJP has spread kerosene all over the country. You need one spark & we'll be in big trouble. I think that's also the responsibility of the opposition, the Congress, to bring people, communities, states, & religions together. We need to cool this temperature down because if this temperature doesn't cool down, things can go wrong", he stated.

He also said, "The Prime Minister must have an attitude that 'I want to listen' and from there everything flows down. But our Prime Minister doesn't listen," he said.

The Prime Minister must have an attitude that 'I want to listen'.

And from there everything flows down.

But our Prime Minister doesn't LISTEN.

In another controversial statement, the Congress leader compared the Ladakh situation to the Ukraine crisis and said, "The Russians tell Ukraine that we do not accept your territorial integrity. We refuse to believe that the two districts are yours, we are going to strike those two districts to ensure that you break ties with the North Atlantic Treaty Organization (NATO). Please see, the situation is the same in both the places."