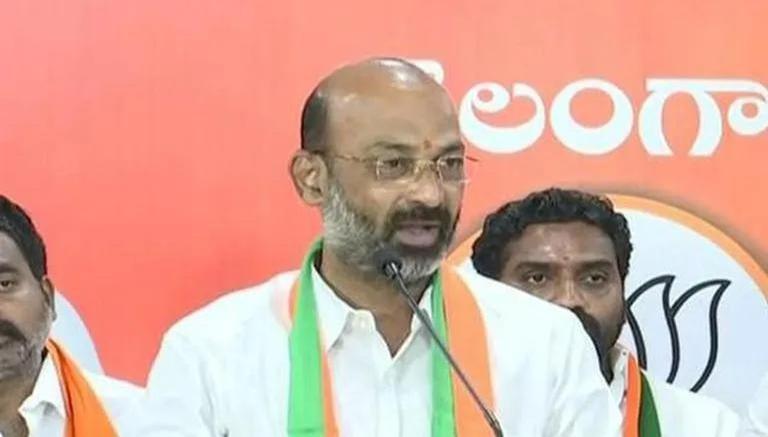 
Telangana Bharatiya Janata Party (BJP) president Bandi Sanjay Kumar lambasted Congress, Telangana Rashtra Samithi (TRS) and the All India Majlis-e-Ittehadul Muslimeen (AIMIM) for creating a controversy around Charminar in Hyderabad and said there is an understanding between these parties and claimed that they are doing it to gain minority votes.

Notably, on Tuesday, Telangana Pradesh Congress Committee secretary Rasheed Khan started a signature campaign to hold a sit-in protest at the Charminar, asking to allow the site to be opened for prayers (Namaz).

"Congress and TRS have an internal understanding. AMIM party is with the TRS; so to get the minority votes, they are trying to create some controversy," Bandi Sanjay said.

He also warned these parties to not put their hands on the famous Bhagyalakshmi temple on the Charminar premises.

Recalling terrorist attacks in the city of Hyderabad, Sanjay further said, "Wherever the bomb blast happens in the country, why is the old city being blamed? Who put the bomb in the Gokul chat, who put the bombs in Sai baba temple and Lumbini park? Who supported them financially? Answers should be given by Congress, TRS and AIMIM."

It is pertinent to mention that on 25 August 2007, Hyderabad was shaken by two bomb blasts that took place at Lumbini Amusement park and Gokul Chat Bhandar (a popular restaurant) in which at least 42 people were reported to have lost their lives.

'Suddenly you remember to do Namaz'

Reacting to the Telangana Pradesh Congress Committee Secretary Rasheed Khan calling for the Charminar site to be opened for 'Namaz', BJP state President Bandi Kumar said, "Today suddenly you remember to do Namaz there. Since I started Padayatra from Bhagyalakshmi temple as the goddess is very powerful there, you started the Namaz issue. If Namaz was held in beginning, we won't object to that just because we pray to the powerful goddess Lakshmi there. If you want to do Namaz as a competition then even the Muslim community will not forgive you."

Telangana Congress leader Rasheed Khan has called for a protest to restart prayers at the ASI-protected Heritage structure 'Charminar'. Earlier, the ASI had stopped Muslims from holding namaz at the site, which the TPCC secretary has demanded to bring back. Speaking to the media about the signature campaign at the masjid near Charminar, Khan said that it is a “constitutional right to freely practice religion.”

The Congress leader called on Telangana CM K Chandrashekar Rao and Union Minister for Culture G Kishan Reddy demanding the reopening of ‘Masjid e Charminar’. It is pertinent to note that there is a famous Bhagyalakshmi temple on the Charminar premises and a large number of devotees visit the temple every day. Now, the Congress leader has launched a signature campaign for the reopening of the mosque, located inside the Charminar.