Ahead of the Rajya Sabha biennial elections in Bihar, cracks have emerged in Bihar Mahagathbandhan, as Congress asks RJD to offer one Rajya Sabha berth to them

Ahead of the Rajya Sabha biennial elections in Bihar, cracks have emerged in the Bihar Mahagathbandhan, as Bihar Congress in charge Shaktisinh Gohil has shot a letter to RJD, reminding them of their promise made during Lok Sabha elections to offer one Rajya sabha berth to the Congress party.

Gohil in his letter has stated, "The promise was made by Tejaswi Yadav to offer one Rajya sabha seat to the Congress party. I want to clarify that our Congress candidate will be from Bihar only."

While speaking to the media Gohil also added, "If RJD does not fulfil its promise then it will affect the alliance and we will call RJD a Paltu Ram, as we call Nitish Kumar." RJD has categorically stated that at no cost will they give a Rajya Sabha berth to Congress.

'Never made such promise': RJD

Bihar RJD President Jagdanand said "Laluji had never made such promises. We have 81 MLAs and we will send 2 RJD nominees to Rajya Sabha. We cannot always make sacrifices for the Congress. When there were questions raised about Sonia Gandhi's nationality by the BJP, Laluji stood by her. Gohilji should be in his limits and it's their decision what they want to do." 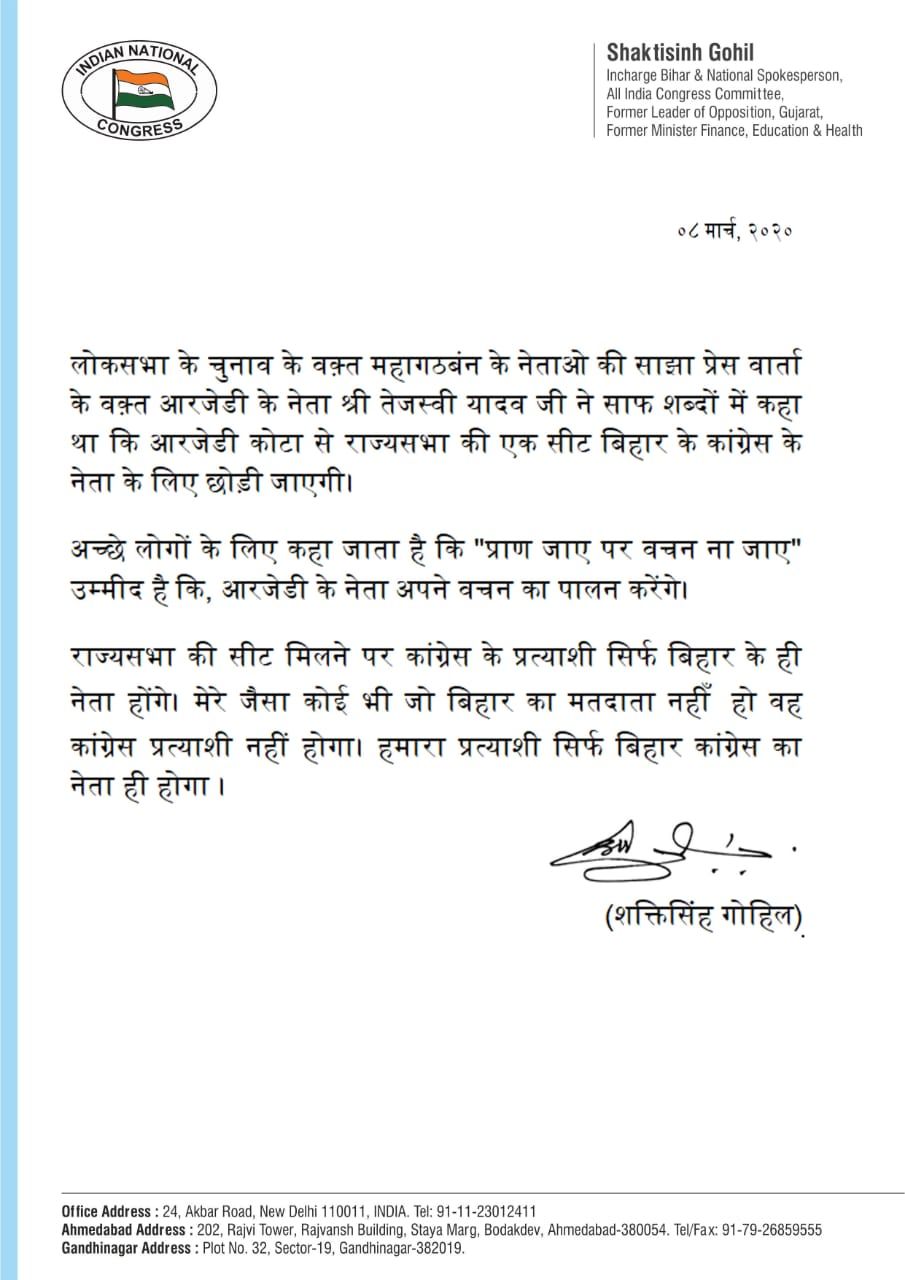 5 Rajya sabha berths are getting vacant and the NDA can send three and RJD can send two nominees. During the 2019 Lok Sabha elections Congress party had reluctantly contested 8 seats with a promise from the RJD that Congress would get one Rajya Sabha berth.

Now that the RJD has denied the claim made by the Congress and has decided to send two RJD nominees to Rajya Sabha, it will surely affect the Congress-RJD relationship in the forthcoming 2020 Bihar assembly polls wherein the Congress party has already expressed its reservation over Tejaswis candidature for CM.