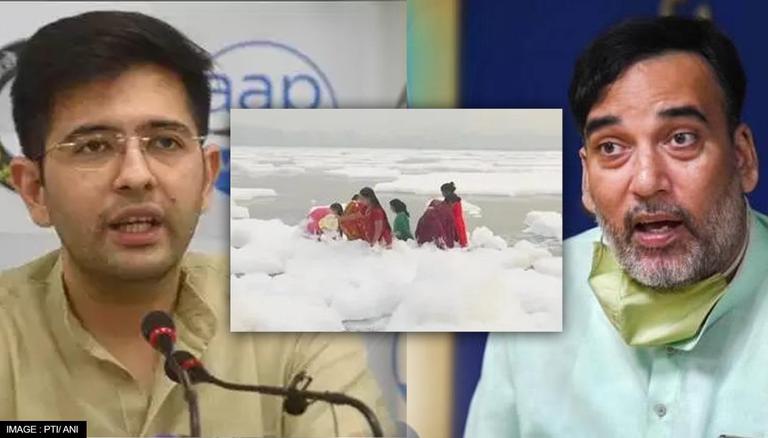 
As the Yamuna river near Kalindi Kunj was found covered in a thick coating of toxic foam on Monday even as people took the holy dip to observe the Chhath Puja festival, Aam Aadmi Party (AAP) leader Raghav Chadha blamed the Uttar Pradesh Government for the river's pollution.

Delhi Jal Board chief Chadha said, "Okhla barrage comes under the UP government irrigation system. This is because of the detergent. The waves sent from UP and Haryana towards Delhi.. it has ample number of chemicals in them. We have requested these governments a lot to treat their water before releasing them, but till now no solution has been given by the UP and Haryana government. Delhi government has taken a lot of steps for the cleanliness of the Yamuna river."

Another AAP leader and Delhi Minister Gopal Rai targeted the BJP for the toxic foam in Yamuna and said, "The dirty water in Yamuna was left by Haryana where BJP is in power. Delhi L-G also belongs to BJP. Delhi government is doing puja and BJP is doing politics."

Rai added, "I want to say that on 1000 places, Chhath Puja preparations are going on... water, light, CCTV facilities are being provided there. I want to request the purvanchalis to celebrate Chhath with proper COVID protocols."

On the first day of Chhath Puja on Monday, devotees took a plunge in the Yamuna river near Kalindi Kunj, which was covered in a thick coating of toxic foam. The residents expressed their plight given the river's water's quality. The toxic foam, according to experts, is caused by a high phosphate content caused by the flow of industrial pollutants such as detergents into the river. The river's ammonia levels have also been rising. Due to the general escalating amounts of pollution, the foam has been seen several times previously. On Twitter, people have been sharing photographs and videos of the toxic foam and criticising the Kejriwal government.

Three-quarters of the capital's water demands are met by the Yamuna River. Regardless of the fact, several polluting industrial units poison the river's water on a daily basis. The most contaminated section of the river is between Wazirabad and Okhla in Delhi, which accounts for only 2% of the river's length but carries 76% of the total pollutant weight. Earlier in 2019, the world's attention was drawn to a foam formation on the river's surface as thousands of people dressed in traditional attire stepped into poisonous foam waters to celebrate Chhath Puja. The National Capital discharges 58% of its waste into rivers, causing the water to become cloudy and discoloured.