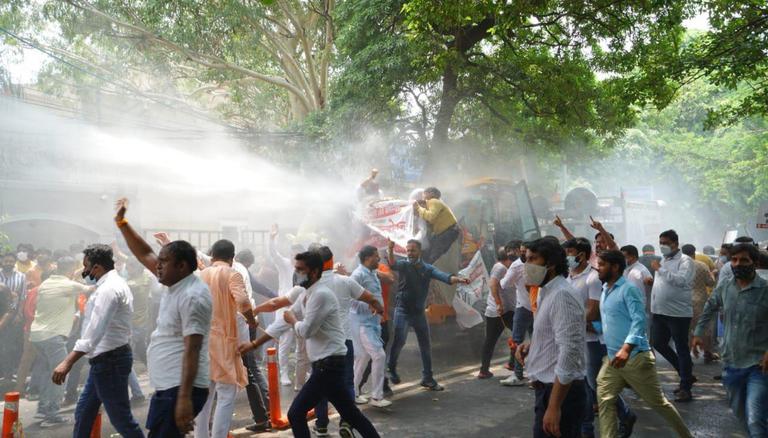 Lashing out at the AAP government over the water crisis, Gupta said, despite tall promises by the government of tap water in every household, almost every area in Delhi is facing water scarcity. On the other hand, areas that are receiving water supply have been constantly complaining about the quality of drinking water.

Delhi BJP media head Naveen Kumar also informed that police used water cannons and lathis on protesters, due to which the mobile phones of many party workers were damaged. Slamming the use of water cannons, Kumar said “tanker mafias” are allowed to flourish, forcing in the city while people depend on water tankers for their daily needs.

According to a senior police officer, around 300 to 400 protesters broke the barricades placed near the Raj Niwas. He said around 10 protesters, led by the president of BJP Yuva Morcha Vasu Rukhar were detained and released. No one sustained injuries.

Leader of the Opposition in the Delhi Assembly Vijender Gupta said that the AAP government came to power with promises of water subsidy, but people ended up paying more either by purchasing clean water or paying medical bills due to poor quality of water.

The Delhi Board has decided to move Supreme Court against the Haryana government, seeking due supply of Delhi's legitimate share as already determined by the SC in 1995, Chadha wrote on Twitter.