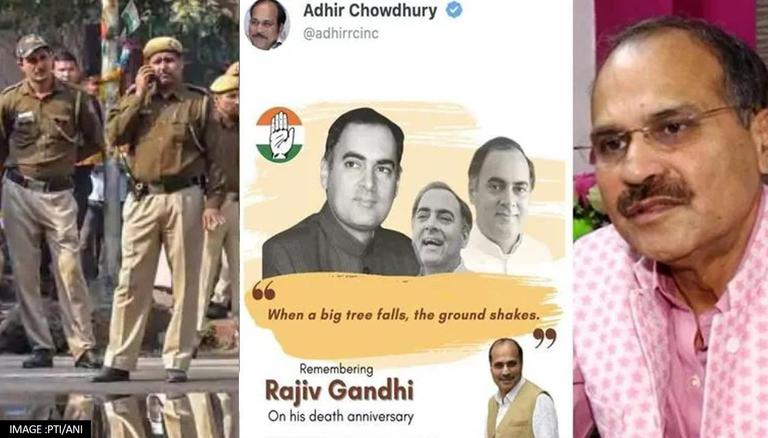 
The Delhi Police requested Congress leader Adhir Ranjan Chowdhury to submit the devices he claimed were "hacked" after allegedly posting a tweet with former Prime Minister Rajiv Gandhi’s infamous "when a big tree falls" quote the former PM said during the 1984 riots.

"It's requested that you (Adhir Chowdhury) submit us the devices which you claim to have been hacked for conducting the investigation on the basis of the complaint made by you. Looking forward to your co-operation. Legal action is being taken," Delhi Police said on Saturday. This comes following the Leader of Congress in Lok Sabha, Chowdhury claiming that the post shared through his official Twitter account was not done by him and that his device was hacked.

Thank you @adhirrcinc for bringing the issue to our notice. It's requested that you submit us the devices which you claim to hv been hacked for conducting the investigation on the basis of the complaint made by you. Looking fwd to your co-operation. Legal action is being taken. pic.twitter.com/Yh3NRPCioN

On Saturday, speaking about his hacked device, the Member of Parliament Adhir Chowdhury wrote, "The content posted smacks of malice and I believe that my Twitter Account had been hacked by some wrongdoers, for the reasons best known to them. I, hereby urge your good self to take immediate cognizance of this instant complaint and please enquire & seal the IP address and take appropriate action of cybercrime at the earliest in accordance with law and oblige."

READ | Congress told Prashant Kishor to go elsewhere, did not like his product: Adhir Chowdhury

BJP files complaint against Chowdhury over his tweet on 1984 riots

Bharatiya Janata Party (BJP) leader and former president of Delhi Sikh Gurdwara Parbandhak Committee, Manjinder Singh Sirsa on Saturday filed a complaint against Adhir Ranjan Chowdhury of the Congress at the North Avenue Police Station. In the complaint, Sirsa accused Chowdhury of spreading hatred against the Sikh community on his Twitter account while paying homage to former PM and party leader Rajiv Gandhi on his death anniversary.

The picture that Chowdhury tweeted had a quote linked to the 1984 anti-Sikh riots. After facing backlash, Chowdhury pulled down the picture and later in a tweet, said that his Twitter handle was hacked. Filing a complaint with New Delhi's South Avenue Police Station, Chowdhury urged the police to take appropriate action against cybercrime at the earliest.

Earlier that day, while paying homage to the former Prime Minister on his 31st death anniversary, the Congress leader had committed a major blunder by sharing a controversial quote by Rajiv Gandhi on his verified Twitter handle. The quote read, "When a big tree falls, the ground shakes." The infamous statement was made by Rajiv Gandhi after the assassination of the first woman PM Indira Gandhi on October 31, 1984, and was further seen as a justification for the anti-Sikh riots.