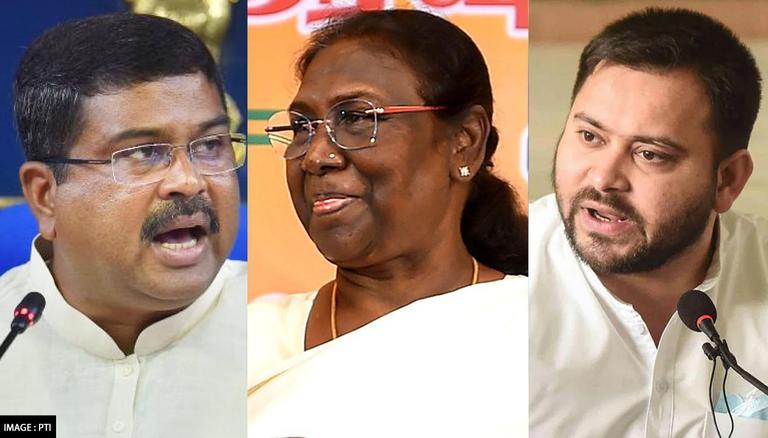 Speaking about Tejashwi Yadav's remark on Droupadi Murmu, the Union Minister of Education, Dharmendra Pradhan on Sunday said that those who are known for creating the most well-known rubber stamp ridicule a presidential candidate who has overcome obstacles and advanced from the bottom up. The BJP leader slammed the son of former Bihar CM Lalu Yadav and said, "Rashtrapati Bhawan is not a backyard of dynasts."

"Those with the history of creating the most famous rubber stamp are insulting a Presidential Candidate who has broken barriers and risen from the grassroots. Juveniles with a silver spoon need to learn some grace and humility," Dharmendra Pradhan tweeted on Sunday.

Those with the history of creating the most famous rubber stamp are insulting a #PresidentialCandidate who has broken barriers and risen from the grassroots.

Juveniles with a silver spoon need to learn some grace and humility. Rashtrapati Bhawan is not a backyard of dynasts. https://t.co/tLCafEXyQa

It is pertinent to mention that the Leader of Opposition in Bihar Assembly, Tejashwi Yadav, who has already announced his party's support for Opposition face Yashwant Sinha insulted Murmu by calling her "statue".

Reacting to Yadav's insult to NDA's presidential candidate, the BJP said that Yadav's remarks show his "anti-tribal and "anti-women" mindset.

"Congress calls her evil, dummy candidate. And now Tejashwi has gone further and said she will be a statue. This kind of anti-tribal mindset and anti-woman mindset is being displayed by Congress and RJD on daily basis," BJP's national spokesperson Shehzad Poonawalla told Republic on Sunday.

Adding further, he said that in opposition to one person and one party, they are insulting a tribal community and women. "It’s a most regrettable statement. RJD is an alliance with JMM in Jharkhand. JMM is supporting Droupadi Murmu. So JMM is supporting the statue?” Poonwalla lauded Murmu as he spoke about the achievement of the NDA’s presidential candidate. “She is an excellent administrator. She won the best MLA award in 2007,” he said.

Leader of Opposition in Bihar assembly Tejashwi Yadav on July 16, while speaking to the media about the upcoming Presidential election, Yadav opined that a 'statue ain't needed in the Rashtrapati Bhawan'.

"You must have heard Yashwant Sinha speak multiple times, but have you ever heard Droupadi Murmu? Since the time, she has been declared a candidate in the Presidential elections, she has not once addressed the media, " said the younger son of RJD patriarch Lalu Prasad Yadav.