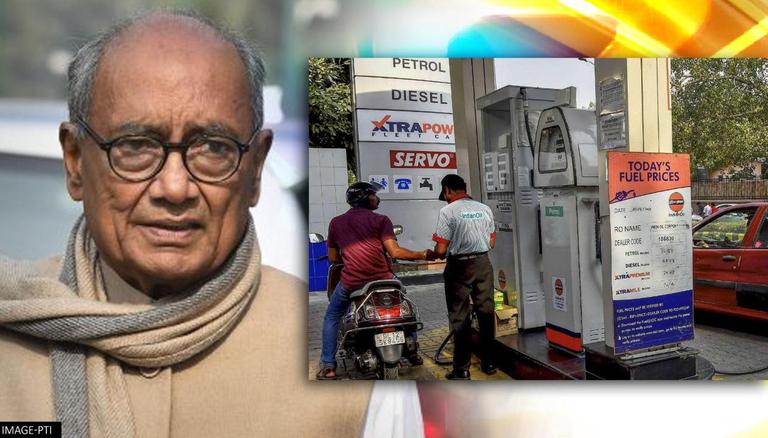 
Congress leader and former Madhya Pradesh Chief Minister Digvijaya Singh criticised the Centre on Thursday over the increase in petrol and diesel prices. Singh took to Twitter to accuse the Centre of taking money from the purses of the common man and putting it in their own pockets, only to spend it on big companies.

"Petrol and diesel prices continue to rise. Modi-Shah Government is taking money out of the pockets of the general public and filling their own treasury, only to further spend it on big corporate," Singh tweeted. (roughly translated)

Meanwhile, fuel and diesel prices soared to all-time highs in major cities on Thursday. Mumbai continues to have the highest fuel prices among metro cities; the petrol price climbed by 29 paise to Rs 109.25 per litre, while the diesel price jumped by 38 paise to Rs 99.55 per litre.

Petrol and diesel prices in India

READ | RSS hits back at Digvijaya Singh's remarks, calls him a 'political joke'

The price of residential Liquefied Petroleum Gas (LPG) cylinders has also been raised by Rs 15 by the petroleum companies. A non-subsidized 14.2 kilogramme home cylinder would now cost Rs 899.50 in Delhi, while a 5kg domestic cylinder will cost Rs 502. Petroleum companies raised the price of commercial Liquefied Petroleum Gas (LPG) cylinders by Rs 43.50 earlier this month.

India imports more than 80% of its petrol and diesel. Brent crude oil has a massive effect on this. A barrel of crude oil's price fluctuates on a daily basis. Fuel prices in India are changed on a daily basis in response to changes in global crude oil prices. Import prices are rising in line with global crude oil prices. However, this is only one factor that contributes to the high retail pricing. The rest is entirely made up of taxes.