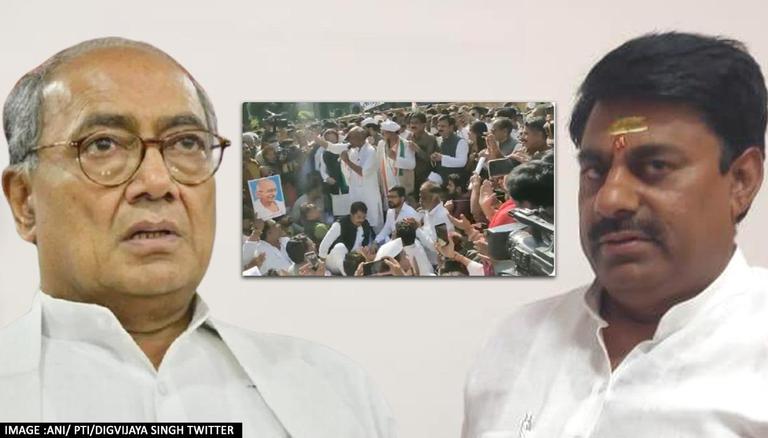 
Indulging in a bitter political war, veteran Congress MP Digvijaya Singh on Wednesday held a 'Ramdhun' protest at BJP MLA Rameshwar Sharma's house in Bhopal. After Sharma threatened to 'break any Congress member's legs who entered his area', Singh took up the challenge. Arranging a yatra, Singh and his followers marched from Gandhi statue to Sharma's residence singing 'bhajans'.

On Tuesday, a video had gone viral in which Sharma was heard threatening to smash the knees of Congress leaders who entered his area. In response, Digvijaya Singh announced that he will perform Ramdhun at Sharma's residence on November 24. “I will start a yatra from the Mahatma Gandhi statue on Nov 24 and will perform Ramdhun at Rameshwar Sharma’s house. Let him break my knees," he said.

Ahead of Digvijay's visit, Sharma had a change of heart and said, "It seems special mercy of the almighty that a person (DIgvijaya Singh) who was against lord Ram all through his life has announced to sing Ramdhun at my doorsteps. I will leave no stone unturned to welcome the guests and will apologize to them if I fall short of anything".

True to form, Digvijaya Singh and his supporters marched from Gandhi statue to Sharma's residence, carrying pictures of Gandhiji, singing the famous bhajan 'Raghupati Raghav Raja Ram'. On reaching Sharma's residence, they were stopped 200 meters away from his home where they squatted and continued to sing 'Ramdhun'. Changing his tune, Sharma immediately threw open his home and welcomed Digvijaya Singh and his band inside, urging them to perform 'Ramdhun' in his home. Accepting Sharma's defeat, the ex-CM and his followers returned back.

Escalating the fight, Madhya Pradesh Home Minister Narottam Mishra said that Singh should be careful of Congress chief Sonia Gandhi as she or her son Rahul Gandhi might issue a fatwa against him for singing 'Ramdhun'. "It is good that 'Chachajaan' will now sing Ramdhun. Digvijaya Singh ji should keep one thing in mind that for singing Ramdhun song Sonia Gandhi ji or Rahul Gandhi ji should not issue a fatwa against him".

Stung by Mishra's comment, Singh said, "Narottam Mishra used to collect Rs 20 from conductors at bus stands in Dabra. Now he's collecting from Collector & SP. I don't take him seriously. He should work at bus stand in Dabra".