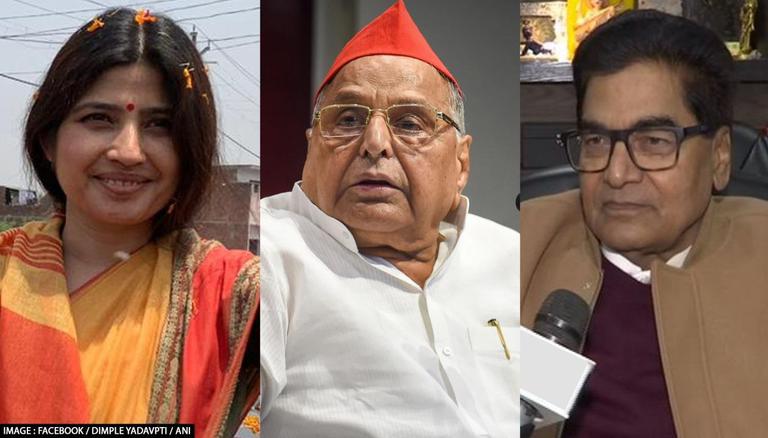 
As voting began for the high-stakes Mainpuri Lok Sabha bypoll in Uttar Pradesh on Monday, Samajwadi Party (SP) leader Ram Gopal Yadav exuded confidence in Dimple Yadav's victory claiming that she will get three times more votes than former Chief Minister and SP leader late Mulayam Singh used to get. Notably, after the death of Mulayam Singh Yadav, the Mainpuri seat-- a stronghold of SP, left vacant, mandating a bypoll. Following this, the Akhilesh Yadav-led SP fielded Dimple Yadav as the party's candidate from Mainpuri.

After casting his vote in Etawah's Safai, SP Member of Parliament Ram Gopal Yadav said, "Dimple Yadav will win with three times more votes than what Netaji (Mulayam Singh Yadav) used to get." Ram Gopal also alleged that some SP agents were not allowed at polling booths.

He says, "Dimple Yadav (party's candidate for the by-election) will win with three times more votes than what Netaji (Mulayam Singh Yadav) used to get." pic.twitter.com/5fADldj4uv

"In Mainpuri, they weren't allowing agents at booths 141, 142, 143, 144, 145, 146. We spoke to Returning Officer, I'll find out if it was later allowed. Similarly, BJP goons came to a powerhouse of Mainpuri in an inebriated state & pushed our agent out. Police and administration are no help," he said.

The SP leader further alleged that many of the staff who were deployed for the poll duties were held back as reserves because they had the "Yadav" surname. "Police-admin doing the manipulation. EC had directed that deployment for duties be randomized. But when polling parties arrived, around 2000 of the staff were stopped and held back as reserves as they had Yadav surname. They forget that not only Yadavs but everyone votes for SP," Ram Gopal Yadav said.

READ | UP gears up for bypolls in Mainpuri, Khatauli, Rampur

"They don't even allow casting of votes in Rampur. The beating up of people started yesterday. SSP there is the one who was removed from Firozabad on my complaint during polls. This SSP was there the last time too and even now. There is nobody to listen but the public is supreme," he added further. It is pertinent to mention that the voting is also underway for UP's Rampur assembly seat as a bypoll necessitated by the disqualification of SP leader Azam Khan after a court ruling in a hate speech case.

It is pertinent to mention that the BJP has left no stone unturned to take over the SP's Mainpuri and Rampur fortresses with Chief Minister Yogi Adityanath leading the charge on behalf of the saffron party. Notably, the results for both the Mainpuri Lok Sabha bypoll and the Rampur Assembly bypoll will be declared on December 8.