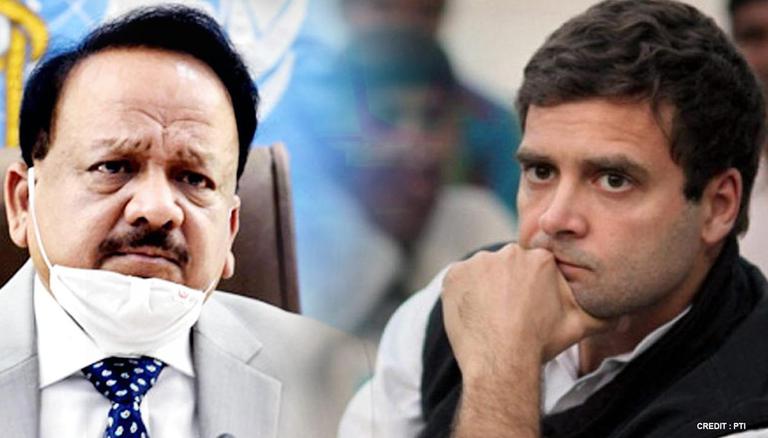 
Dr. Harsh Vardhan on Sunday gave a befitting reply to Congress leader Rahul Gandhi. Taking to his official Twitter handle, the Union Health Minister wrote that the country needs the 'right' opposition, which has a 'right' thinking and the 'right' trust in the government instead of 'absurd' talks 24*7. Earlier in the day, in a similar fashion, the Congress leader listed down on the microblogging site the ways to curtail the spread of COVID-19, which were 'right' intention, right 'planning' and right 'goal' instead of 'absurd' talks once a month.

It all began when Gandhi once again took to his official Twitter account to take a dig at the PM Modi-led central government on handling the COVID-19 situation right after PM Modi addressed the nation through his monthly radio program 'Mann ki Baat'. This time choosing Hindi as the language, the Congress leader in a rather poetic tone wrote, "To battle Corona, we need the right intention planning and goal" and carried on "Not absurd talks once a month."

This time, his tweet did not go unnoticed or ignored and was instead answered by Dr. Harsh Vardhan. Replying in the same language, and similar poetic fashion, the Union Minister wrote, "The country needs the 'right' opposition, which has a 'right' thinking and the 'right' trust in the government to fight COVID-19" and added, "not 'absurd' talks 24*7".

In the 77th edition of Mann Ki Baat that was aired on the radio on Sunday, PM Modi extensively lauded the 'Corona warriors' who had risked their lives to provide service to the nation in the course of the COVID-19 pandemic. He spoke to several frontline workers such as Dinesh Upadhyay, who drives a liquid oxygen tanker, Shirisha who manned the all-woman Oxygen Express, and IAF Group Captain A K Patnaik who has worked to transport one of the biggest necessities- Oxygen from abroad and across India. The PM also revealed that India was producing 900 metric tonnes of liquid medical oxygen in a day an increase by over 10 times in the course of the pandemic.

Speaking to Railway pilot Shirisha, PM Modi lauded her parents for encouraging daughters like her to work for the nation. Sharing her story, Shirisha said, "My motivation is from my father and mother. My father has always encouraged us to work. Indian railways are also very supportive. They gave us a green path to ensure 125KM could be covered in an hour."

Group Captain A K Patnaik and his young daughter also interacted with the PM on Mann Ki Baat. "We are fortunate to be able to help our countrymen during this time of need. Over the last one month, we are continuously transporting oxygen. What took 2-3 days is now happening in 2-3 hours. Even international operations are being carried out around the clock. We have flown to Singapore, Dubai, Belgium, UK Germany on very short notice," the IAF officer revealed.

During 2nd wave of COVID19, a major challenge was to supply medical oxygen to remote areas. To counter challenges that the country faced, drivers of Cryogenic oxygen tankers helped by working on war footing & saved lives of lakhs of people: PM Modi pic.twitter.com/7ICozn0Mzi

He also took the opportunity to talk about the natural calamities hitting the country lately. "Over the last year, it is also battling other calamities such as Cyclone Amphan, Nisarga, floods, earthquakes, In the last ten days, the western and eastern coast saw two cyclones. I want to humbly acknowledge the efforts of those who actively participated in the relief and rescue operations. I salute them all," said PM Modi on Mann Ki Baat. He added, "The central, state governments and local administration are all working together to face this disaster. I express my condolences to all those who have lost their close ones."

Besides, in his address, PM Modi also pointed out that the NDA Government had completed 7 years today stating that the last 7 years had seen more development than decades. "This is because we worked as a nation as Team India instead of working as a political party. So many villages and people received electricity, water, and proper roads, and their own houses for the first time since 70 years of independence," he said.

"Over the last 7 years India has also led the world in digitization and digital payments have come to great use amid the COVID-19 pandemic. Even big nations have not escaped from the pandemic but during this health crisis India undertook the pledge of 'Service and Cooperation' to help other nations," said PM Modi on Mann Ki Baat live.