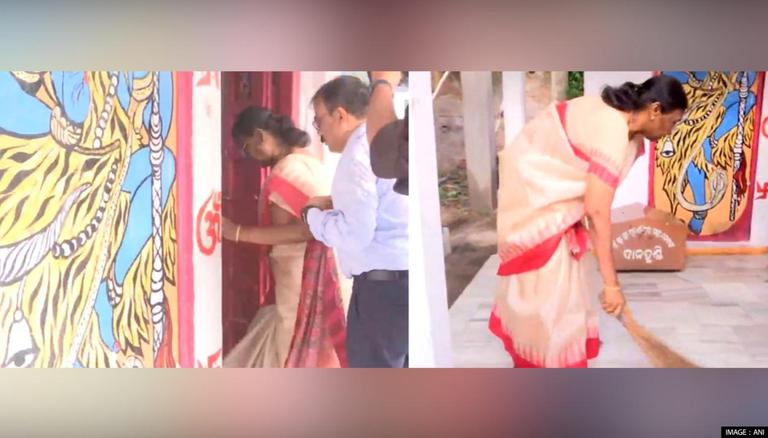 
The Bharatiya Janata Party-led National Democratic Alliance's (NDA) candidate for the upcoming Presidential elections, Droupadi Murmu arrived at a temple in Odisha's Rairangpur on Wednesday morning and was seen sweeping the floor of the temple before offering prayers. Murmu paid a visit to the Shiv temple in Rairangpur in the Mayurbhanj district of Odisha for offering prayers after her name was picked by the NDA for the polls.

After arrival, she picked up a broom and swept the entrance of the temple, and then entered the temple premises. Notably, Ms. Murmu has been living in her village in Rairangpur since July 2021 after the completion of her tenure as the Jharkhand Governor.

BJP national president JP Nadda on Tuesday announced the name of ex-Jharkhand Governor Droupadi Murmu as the NDA's candidate for the upcoming presidential polls. Stating that her name was picked from 20 names of presidential nominees, Nadda also added that a decision was finally taken to select someone from east India, specifically a tribal and a woman.

On the other hand, PM Modi also welcomed the move stating that Droupadi Murmu has devoted her life to serving society and empowering the poor people. Further exuding confidence in her, he said that she has rich administrative experience and had an outstanding gubernatorial tenure.

Smt. Droupadi Murmu Ji has devoted her life to serving society and empowering the poor, downtrodden as well as the marginalised. She has rich administrative experience and had an outstanding gubernatorial tenure. I am confident she will be a great President of our nation.

"Millions of people, especially those who have experienced poverty and faced hardships, derive great strength from the life of Smt. Droupadi Murmu Ji. Her understanding of policy matters and compassionate nature will greatly benefit our country", he added.

In meantime, Murmu's name was announced just a few hours after the opposition also named former minister Yashwant Sinha as their candidate for the presidential election scheduled for July 18.

It is pertinent to note that Murmu who was born in Odisha's Mayurbanj district belongs to a tribal community. She was also the first tribal woman from Odisha to get appointed as a governor in Jharkhand. Now if elected, the country will get its first tribal woman as the President. Also, she will become the first president to be born after India got independence.