As Congress goes through a political churn, Haryana Dy CM and JJP chief Dushyant Chautala on Saturday, claimed that the Congress was nearing its end. 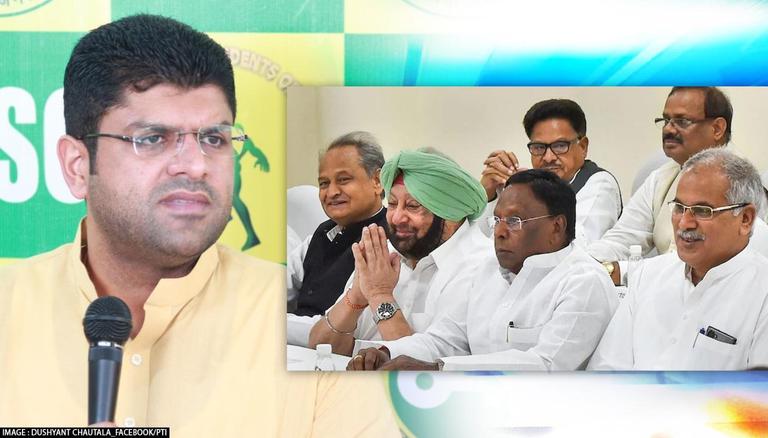 
As Congress goes through a political churn, Haryana Dy CM and JJP chief Dushyant Chautala on Saturday, claimed that Congress was nearing its end. Citing the various Congress CMs' dilemma, he said the change witnessed in Punjab will be seen in Rajasthan and Chhatisgarh too. He added that when a party does not trust its leadership it cannot develop a nation. JJP is in alliance with BJP in Haryana where the saffron party is facing severe flak from protesting farmers.

Dushyant Chautala: 'Punjab situation may be seen in Rajasthan & Chhattisgarh'

In contrast, Dushyant's grandfather and Indian National Lok Dal (INLD) supremo Om Prakash Chautala batted for a third front against BJP. Chautala slammed the centre and said that the country is run by the farmers, who are now forced to protest. Urging Opposition parties to unite against the BJP, he said that the malpractices of the BJP must be voiced.

"In view of the ongoing farmers' protest and to safeguard the interests of the country, I urge all the political parties of the third front to come together (except BJP and Congress) and speak against the malpractices being carried out by the Centre. Also, if Bihar Chief Minister Nitish Kumar ji wishes to join, he can do so," said Chautala.

Speaking about Congress, he added, "The main problem with Congress is that their party does not have a strong party president. Due to this reason, the functioning of this party lies in the doldrums. However, if they feel confident to voice against the Centre despite this flaw, we welcome them."

Recently, 79-year-old Capt Amarinder Singh tendered his resignation from the Punjab CM post after 4.5 years along with his council of ministers after being blindsided by the CLP meeting called without his knowledge. Terming Punjab Congress chief Navjot Singh Sidhu an incompetent, anti-national, pro-Pak man, Singh said that he will oppose if Sidhu is picked as the next CM. Congress is also facing troubles in Chhattisgarh with TS Singh Deo's bid to pique CM Bhupesh Baghel, as per the party's 2.5-year promise. Congress is also managing the crisis in Rajasthan, attempting to placate a miffed Sachin Pilot against CM Ashok Gehlot.