Enemy’s Enemy, Not A Friend For AAP; 'third Front' Third Wheeling In Gujarat?

Mega campaigning of AAP under the banner of Jansamvedna Mulakat was attacked by a mob in Gujarat's Junagadh, which left at least 10 AAP volunteers injured 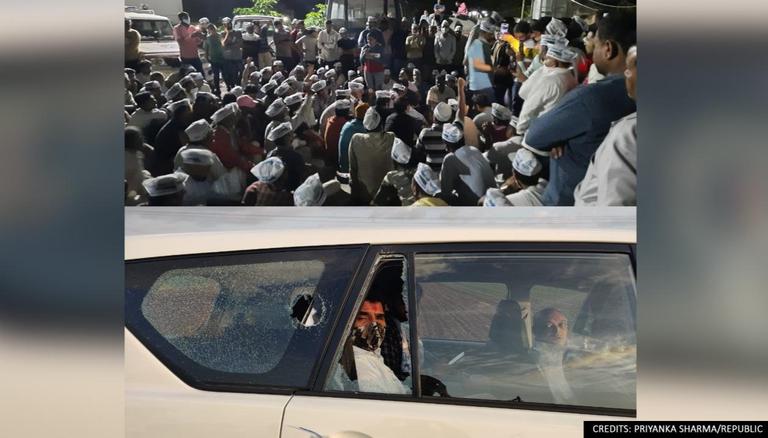 
Since the Aam Aadmi Party (AAP) managed to get several seats in Surat Municipal Elections (SMC), and their declaration that they will be fighting in all of the constituencies in 2022 elections, the seeming third front has locked horns with not just the majority party of the State, Bharatiya Janata Party (BJP) but also the main opposition party, Gujarat Pradesh Congress Committee (GPCC).

This became evident when the recently announced mega campaigning of AAP under the banner of Jansamvedna Mulakat was attacked by a mob in Junagadh on June 31 evening, which left at least 10 AAP volunteers and members injured. After that, the AAP members gheraoed the Visavadar Police station in Junagadh, which was where finally an FIR was registered. However, in the wee hours of the morning, an FIR was registered against the AAP members under IPC sections 307, 323, 324 which includes an attempt to murder as well.

“We were getting a lot of good response from the people who we were meeting under the Jansamvedna Mulakat. We were attacked by the BJP who is trying to making Gujarat into Bihar. The Chief Minister and the Home Minister is involved in this conspiracy, there were at least 20 people who had planned and attacked us,” said Ishudhan Gadhvi, a former journalist who had joined AAP and became a star campaigner for the party in the State.

‘This is a case of the pot calling the kettle black,’ said another AAP official commenting upon the FIR registered against AAP members.

While the entire incident had wrapped up till Thursday morning, the political tremors of the incident that took place in Junagadh were felt in Gandhinagar as well. BJP was quick to defend the party and lash out against the AAP and called the attack a result of ‘their karma’.

Nitin Patel, the Deputy Cchief Minister of the State claimed, “Some of their (AAP) people were the ones who were throwing stones and shoes at our leaders in the past, now they are facing their karma. However, I assure the people, nobody from the BJP was involved in this. Their leader has hurt a lot of sentiments when he made anti-Hindu statements; and the party should introspect.”

Patel was referring to an old video that went viral recently of Gopal Italia, where he was criticising several Hindu religion rituals and questioning their scientific temper. While, predictably, the BJP leaders lashed out against the AAP members, even the Congress leaders chose to condemn the AAP. Arjun Modhwadia, the former GPCC president, condemned the violence and added that it was the AAP who was detached from the ground realities of the State. He also lashed out against the BJP while addressing the viral video of Italia and stated that these were just words but BJP has done the practicals of it by murdering Haren Pandya.

“There were letters written by their families claiming that it was Narendra Modi himself who had gotten him murdered. Look how they have treated Jay Narayan Vyas who is another Brahmin leader of the party. Where is he?” Arjun Modhwadia said while speaking to the media personnel in the state.

He also attacked the AAP, calling them the ‘B-Team’ of the BJP, and mocked them by saying that they were ‘new to the State’ and that ‘their presence was limited to Delhi’. “They should keep their ego aside and come fight with us against the BJP. We are the only ones who are fighting against BJP and they should stop acting like their B team,” he added.